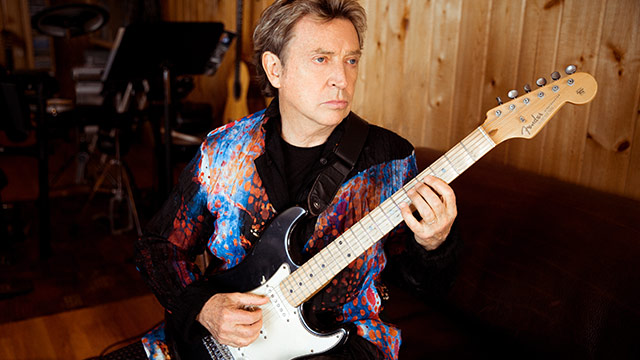 Though he'll be forever known for his riffing on songs like "Message in a Bottle" and "Every Breath You Take," former Police guitarist Andy Summers has maintained a fruitful career apart from his band, dating back to his early 1980s collaborations with Robert Fripp and his 1987 solo debut, XYZ. Further albums came out like clockwork through the 90s, sometimes paying homage to jazz legends like Charles Mingus and Thelonious Monk, other times exploring Summers' own, experimental creations. When the Police reunited in 2007 for a world tour, Summers pressed pause on his other projects, but after recovering from the grueling tour, he got back into his routine, releasing Metal Dog in 2015, and, now, Triboluminescence.

The instrumental album takes inspiration from Summers' travels, and features him playing his guitar in sometimes unexpected ways on tracks that blend carefully considered composition and uninhibited improvisation. We spoke with Summers about his new album, which is out now, his ever-evolving relationship with his instrument, and why he opted for a South Park-themed guitar strap on the Police reunion tour.

AllMusic: All of the songs on Triboluminscence are instrumentals. Did you start any of them with a mental image and go from there?

Andy Summers: I don’t say like, “I have an image of a sand dune, or a pine tree,” I go in with nothing, except everything that’s happened to me in my life, with travels and music I’ve heard and things I’ve seen. My advice to any young artist is get a lot of experience, because it will change what you do. With the last record and this record, I knew where I wanted to go in terms of the aesthetic I was putting across, with sort of overall world music from my travels in Asia and Africa and places like that, so this all comes into it. There are some pretty interesting, exotic sounds on it, so I’m looking for something fresh and new that I can do with the electric guitar and still make new music out of it all.

Images come to mind as you’re creating something. On the song “Triboluminescence,” I imagined I was in a village in Bali, in Indonesia, where I’ve been a couple of times. “Pukul Bunye Bunye” is another one, where I started to hammer on my guitar to get this particular effect. It’s very much about creating moods and imagery, and a soundtrack to go with it.

AllMusic: As much as you obviously still enjoy tinkering with sounds and tones, are you still one to pick up a guitar and just start strumming?

Summers: Yeah, sometimes you just want to jam, and I’ll just play. I don’t know if I practice, so much as I’m a guitar player, so I play guitar every day. I do it because I enjoy it, and I like to improvise for half an hour on whatever comes to mind, and I don’t feel like I have to practice, I just play. Something like classical guitar takes more assiduous practicing, running scales, but on electric guitar, I can just pick it up and start flying with no problem, and sometimes I’ll come up with a chord progression and play through it. So I do still play for fun and enjoyment, as well. For me, it’s about creating these other sonic possibilities and evoking imagery with a guitar, so I really enjoy using a giant box of colors to play around with tones and see what they inspire.

AllMusic: Is the process of building these songs more meticulous or impulsive?

Summers: This album took me six months to make; not in the studio every day for six months, but over a period of six months. It was very meticulous, the combination of musicianship, compositional ability, trying to have a moment where you feel inspired solo-wise, and aesthetically, thinking about the overall thing, if it’s pushing any new borders. It’s very meticulous in its attempt to try to create something new, and it’s in that meticulous mindset that you get these moments of spontaneity, but they have to fit in. A huge amount of work and detail goes into it, and you can hear the various layers of tracks on a song like “Gigantopithecus,” and they take a long time to form and go through many changes before I sign off on it and say, “OK, it’s there.”

AllMusic: Do you write out charts for these songs or is that impossible?

Summers: You can’t write it, usually it starts with a sonic quality that I create through matching devices and tones, and if I get something that’s interesting, a certain echo sound, it catches my ear and I’ll put down 16 or 32 bars of it with a click track, and if it inspires me to write something over it, that’s generally where it starts. Sometimes I have to write out a sort of schematic of where the piece is going, so I can stand back and look at them. In my studio at home, I have other pieces that are written-out compositions that I probably should make an album from.

AllMusic: Do you think of each song as a problem to be solved?

Summers: I’m not trying to make life hard for myself, but the challenge is always making it really have something of quality and character and an attitude. Making original art is challenging, you’re not just going to knock it out, this was a long, labor-filled project to get to this place where you have 53 minutes of music that’s all original, that takes time.

AllMusic: When naming the songs for an instrumental album, are you tempted to give songs joke titles or do you tend to play it straight?

Summers: Being English, we have an overdeveloped sense of irony, which sometimes falls flat in America, but I believe in that, and I have many, many titles. I don’t generally start with a title and make everything match the title, although I did have Triboluminescence in mind for quite a long time, I discovered that word in a science book I was reading and said, “What a great word, I have to use that somewhere.” I always have plenty of titles, so afterwards, I’ll look at the names and titles I was sitting on and find some that fit the mood of the music, and then you have to make sure they all look good together. You need something intriguing and suggestive that gives you a hint about the music.

AllMusic: What's the longest you can go without playing guitar?

Summers: I can’t go much longer than three days. I can go on a trip, camping or whatever, and three days is about my limit. I went to Asia once for 10 days and it almost killed me, I couldn’t stand it. It’s such a part of me, it’s just something I need my hands on. I have a few Yamaha travel guitars that fold into a canvas bag you can put over your shoulder, so I can take one of those with me and at least have my hand on something and keep it going. I don’t like to be away from it for more than a couple of days.

AllMusic: Do you have dreams about music?

Summers: I dream fairly vividly. I’ve had nightmares about music, and I haven’t had this one for a long time, but it’s one that would recur; I’m onstage, playing to an audience that are all staring at you, and your hands become glued to the neck of the guitar, literally, strands of glue coming off your fingers on the neck of the guitar, and it’s slow motion and you become like lead and everyone’s looking at you. Paralysis in front of thousands of people.

AllMusic: Could you have made this album, say, 10 years ago, or is it more informed by recent experiences?

Summers: 10 years ago, I was going on tour with the Police, so that was all-absorbing, I couldn’t have created an album like this in a moment like that. But before that, I’d created many albums in this vein, and they were getting more jazz, I made a Monk record, a Mingus record, and I was playing a lot of jazz festivals with a trio. This material is different, it’s more exotic, and more of the moment, more of the time we’re in. It’s not straight-ahead jazz, although there’s soloing and improvising in it, but I think these last two records are different than the ones I was doing 10 or 12 years ago.

AllMusic: People were clamoring for that Police tour for 20 years. Then it happened, and now it's been 10 years since. Time flies.

Summers: Yeah, it’s a shock, because it was such a highly-colored couple of years that we did that, it was like the biggest tour of all time, it was quite incredible. Obviously, when you’ve been on the road in a situation like that with that many people, it takes a couple of years to settle down again and get back to ground zero and back to your own thing, and it took me about 18 months. I can’t even remember what I did, but I must have been doing something. Then it was patchy, I wasn’t making records every year, but now I’ve come back to this, which I’m enjoying, I feel inspired by this set of music. I’m working with a cellist right now on something I think is pretty cool, and I’ll probably put that out next. It’s a musician’s life.

AllMusic: What was the impetus for your South Park-themed guitar straps on that tour? Do you still have them?

Summers: I thought it was funny, I can’t remember quite where I got it, but I got a few of them and put them on all of my guitars for that tour, and we all thought it was hilarious, so I wore it for the whole tour. I didn’t get as much out of that as I was hoping, I thought everyone would think it was hilarious, but a few people picked up on it. I think I’ve still got them. I should give them to the fan club or something.