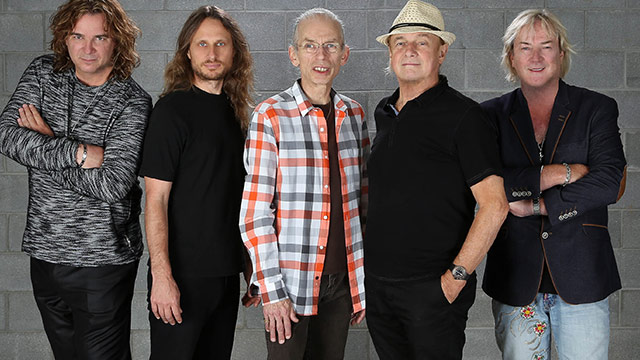 Since the late 1960s, British band Yes has been spreading the gospel of artsy, progressive rock around the world. Other than two brief hiatuses, Yes has been active practically nonstop since its 1969 self-titled debut, carrying on through their most recent album, 2014's Heaven & Earth. The band is currently wrapping up a co-headlining run with Toto, followed by the band's dedicated cruise, dubbed Cruise to the Edge, which embarks in mid-November. It's been Yes' first run of shows since the passing of bassist and founding member Chris Squire in June. Former Yes rhythm guitarist Billy Sherwood has stepped in to take on bass duties.

Guitarist Steve Howe has appeared on the majority of the band's releases, and has authoritatively held down his position at stage right for decades. We caught up with him during the east coast segment of Yes' tour with Toto to discuss what drew him to the guitar as a child, why it's important to play with different musicians over time, and his apprehensions about playing on a cruise.

Steve Howe: Are you kidding me? I’ve got 10 guitars that I played at soundcheck and then I played the gig last night, so no, I haven’t touched a guitar today, I’m very sorry. I’ve been playing 55 years, and I’ve learned the guitar has a tremendous role in my world, but it doesn’t occupy every living moment, I have a family and a beautiful wife, and I have a million things to do in my day that are beautifully arranged without music or without a guitar.

AllMusic: Do you feel you're still learning, are you still able to find ways to challenge yourself?

Howe: Isn’t it a great instrument, shouldn’t I keep playing? I don’t need a reason, I don’t have a reason, I just have momentum, and my love for Chet Atkins, Wes Montgomery and several other guitarists, it’s been motivating me all the time. The guitar is a fascinating instrument, and I’m now seeing a lot of younger people, even my younger family, taking to the guitar with great love, so I’m only perpetuating that love. It’s my mental mindset, I haven’t lost it, it’s the same thing I’ve had since I was 12 and wanted to play the guitar, it’s now been all those years and I don’t play badly, so I can enjoy the opportunity to write music from that momentum, as well.

If I was just a twanger and a blues wailer, I might not be so involved, but I’m involved in music on a lot of different levels, writing, recording, archiving, all the things I’ve done that have never been released, a guitar collection, amp collection, it goes on and on, I could keep adding different things to why I’m interested in it. There’s not one single brain cell that’s motivating me, it’s a whole range of worldly knowledge about the guitar that I love.

AllMusic: With Billy now on bass in place of Chris, do you have to work harder to communicate onstage? I imagine after so many decades with Chris you had a bit of a shorthand.

Howe: Yeah, all relationships with other musicians are based on a level of telepathy, but whether or not that was at a peak when it ended with Chris, I wouldn’t know, I wouldn’t know how to say that. You can’t deny that we’d been working together over the years, not all the time, but for about 45 years of music, with some considerable gaps in there, thank goodness, because one of the things about working with different musicians, and I could say this about Billy, and this is not underestimating our sadness and loss of Chris, but you have a new player, like Billy, and there’s no real comparison to what Billy used to do with Yes and what he does now, or what he did in the interim. Now he’s playing the bass, and that’s a different kettle of fish, as we’d say.

But that’s a very healthy thing, Bill Bruford used to say to me that he doesn’t know how I could keep playing with Chris and everybody I’d played with for all these years, because he believes, like a lot of jazzers do, that you have to keep moving on. If you stay with the same people, you’ll be running in the same tread, which isn’t strictly true, because we’ve proven with Yes that you can bring the music to life every night. But there’s a new dialogue happening with Billy, and it’s really great. Billy is doing something that really fits, which is playing Chris’ parts with the right sounds, as well, having programmed the guitars and basses to have the right texture, the right distortion, and he plays it with such love, he’s not trying to show off or say anything, because he has a great respect for Yes music, and that’s partly what we’re all saying.

AllMusic: Yes has a pretty dense catalog; how many of the songs do you think you'd be able to play off the top of your head without having to listen back to them?

Howe: That depends on a few factors: one is, have we been playing it in the last 10 years, or is it one that’s been lost, either I didn’t play on it or it’s so far back that we didn’t play it. So if we’ve played it in the last five or 10 years, I know it pretty much between 70 and 90 percent. If it goes back a long way, like “The Gates of Delirium,” I could play quite a lot of that, but there would be an awful lot of detail I didn’t have that I’d have to go back and learn. The tunes I never forget are the ones I wrote 100 percent of, like my pieces that I wrote for solo guitar. Those, I remember pretty much perfectly and know everything about them.

There might be a gray area here or there, but with the Yes tunes, the same thing, if I wrote a lot of it, “Close to the Edge” or “Awaken,” the things I had a big part in writing, then I can’t really forget them, they don’t go away. So likewise, with tunes like “Sound Chaser,” obviously not. I know a bit, I know the guitar solo and a few bits of it, but I could just sit there with a CD player and start playing along with it, and then keep going back and forth through the bits that are unknown or less known.

AllMusic: The cruise in November is probably going to be stocked with diehard fans. Are you thinking about digging out some deeper cuts for them?

Howe: We have a responsibility to develop a show, because we won’t have Toto with us, and we’ve got more time to play. And if people had seen us in the summer and we played the same music on the cruise, that would be somewhat disappointing. So we’re going to spice up the show with about half an hour of other music that is going to have a reference towards things we need to play next year, anyway, when we’re playing Fragile and Drama in Europe. So we haven’t played the whole of Drama in America, or anywhere, yet. But by early next year we’ll have played it in Europe, so we might introduce a little more of Fragile and a little more of Drama into the show we’ve got now, which is a mixed bag show, kind of a general show, if you like.

We have a few like “Don’t Kill the Whale” and “Time and a Word” that are pretty exceptional songs to bring in right now, and they mean a lot to us, because they’re deep songs, they’re very powerful, and we haven’t been doing them for as long as I can remember. “Don’t Kill the Whale” goes so far back, 15, maybe more years, so it’s exciting being able to do that. It freshens that feeling up. So we’re going to do this show plus another half an hour.

AllMusic: Are you comfortable on boats?

Howe: I did a solo one of these in 2000, with a smaller group of people, on a boat with 2,000 people, and I thought, “Never again,” when I came off. “Never, I don’t need to do that ever again.” But I do need to do it again, because when Yes got offered, it was a fairly different concept, it was a much bigger affair, there was more security, we’d have more privacy, and basically it was like a business idea, we created the brand, Cruise to the Edge, and we got something that’s quite palatable, quite manipulable. That isn’t to say that we’re going to keep doing it, we don’t know. Each time we do it, it is a test. “OK, are we going to do it again?” They always want us to commit to another one, but it depends on how it goes. We’ve never tried it in November, the others have been in April, so we have to see. I think one has to keep things open in your mind.

They’re fun, there’s things about them I like, and that fans feel this closeness to us, which is somewhat of a reality, we are on the cruise, we are on the boat, there’s a lot of music, so it’s like a floating festival, really. I don’t need to get off the boat a whole lot to look around Barbados, I’ve been there, I’ve been to Mexico, I’ve seen it, done it, bought the t-shirt. So I’m a fairly unadventurous, non-tourist sort of person now, because I’ve seen an awful lot of the world. I like simple things now, I don’t need to go to another resort, I’m not big on sitting in the sun, getting scorched, I’m just not big on all that stuff, and that’s fine. I’m a happy guy, I like what I do, I pay attention to my things and the way I run my life, it just suits me perfectly. I designed it myself, and if nobody else likes it, at least I’d better. That’s the way I approach the cruise, really. I’m there, it’s just not the greatest thing to be on a boat.

AllMusic: You've convinced me to stay on land.

Howe: If you like boats, it’s great, people get a kick out of it. Like when we used to fly on the Concorde, that was an astounding experience, you felt like you were going to the moon on a rocket ship. But things change, don’t they?