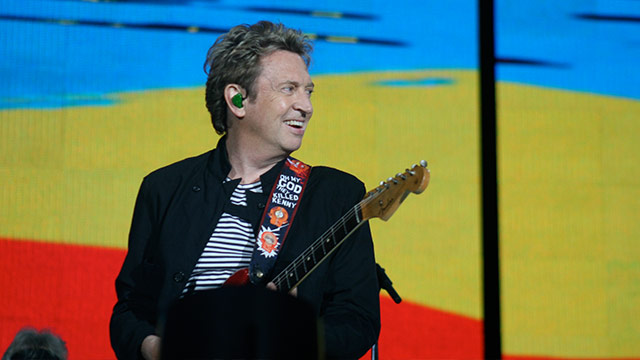 Last week we debuted a clip from Andy Summers' new documentary, Can't Stand Losing You: Surviving the Police, an updated adaptation of his 2006 memoir. We caught up with the Police guitarist and Rock and Roll Hall of Fame inductee to talk about some specific scenes in the film, his lifelong relationship with the guitar, and the Police song he thinks deserves a second chance at success.

We selected a few of our favorite bits of the interview and intercut them with more footage from the documentary, as well as provided a full transcript of our chat with Summers. Find out which Police song he thinks best defines the band, how often he still hears his old band's music out in the world, and just how quickly the band returned to its shaky status upon reuniting in 2007.

AllMusic: In the opening scene of the movie, we see you playing the guitar while doing household things. You also talk about how the guitar never left your side as a kid. Are you still as attached to the guitar as you were then?

Andy Summers: It’s similar, yeah. Sure, from a fairly young age, I had the instrument, and once I had it, that’s pretty much all I did all day long, apart from going to school.

AllMusic: You said you knew right away that that was it, you were a guitarist.

Summers: Yeah, I was. I don’t know if I really articulated that in my head, but there was nothing else in my mind except that, that’s absolutely true.

AllMusic: What keeps you so attracted to the instrument?

Summers: Yeah, what is it about it? Because I’m still trying to get better at it, I haven’t got it yet, I’m still working at it. It’s a fascinating instrument, obviously, and in a sense, you never master it. You become very good, but there’s always something you can’t do. It’s a particularly obsessive instrument, like when guitarists play together, “I want to know why you’re doing that…” There’s so many options on the guitar, whereas on the piano, it’s just laid out, there’s only one middle C, and there’s four or five on guitar, so you've always got these options. So in a sense, you’re always working with this rather difficult geography of the neck of the guitar and the six strings. So it’s a brilliant instrument, and it’s one you can share with a lot of other people, look at its popularity. It’s fascinating, I’m still fascinated by it.

AllMusic: You mentioned that during the reunion tour, your kids got to see you perform. Have you passed music along to them?

Summers: I did, none of them have really taken it up as a profession, but they've all grown up playing instruments. One of my sons is a very good drummer, and the other can play any instrument very well, they’re all quite musically gifted. My daughter has a beautiful voice. None of them really went for it. I think it’s the cliche of the father, and all that, it’s a bit of shadow to live in. But they’re all great, and it was a thrill for me for them to come and see this reunion tour, because as they were growing up as little kids, I’m blathering about this band I used to be in, but finally we did the tour and of course they were of an age when they could come and see it, and it was fantastic for them.

AllMusic: In the film it shows footage from the earlier days of the band bickering, and then we see more of it on the reunion tour. It’s very much the more things change, the more they stay the same. Did it feel like the same tension or was it a new thing?

Summers: Yeah, the tensions going back were still there, it was immediately apparent. We started off rehearsals in Vancouver, and it was completely tense at the beginning and I’m thinking, “Oh god,” as we’re trying to get into it. What we did was we got back together, “Are we going to do this reunion tour?” and we were rehearsing to open the Grammys that year, and we almost only rehearsed “Roxanne” over and over again. Why, I don’t know, but it was sort of a testing ground to see if we could make it together again. It’s not the playing, that wasn't it, it’s the psychological thing of being together and if we could just hang with one another and get through the whole set and really rebuild the whole show.

AllMusic: When you were going through the old photographs and footage for the book, and then again for the movie, did it bring up new memories different from the book?

Summers: Yeah, I might have examined them in a slightly different light than before, they were very important to me as a memoir. I didn't keep extensive notes of everything, like a daily journal, I’d just turn insane, but I did photograph pretty much everything, so I had thousands of contact sheets, all marked, city by city, country by country, wherever we were, and, of course, the music. One of the things that put me in that place was looking at photographs and playing the music to put me into a sort of memory state, and what I was going through emotionally, which is what I tried to put into the book, so there were a lot of tears on the computer, on my laptop. I found it important to get into a cathartic state to write some of it. Obviously, the book is more layered than the film, it goes into a lot more inner stuff, which you can’t always get into in the film.

AllMusic: There’s a scene where you walk by a karaoke bar and people are singing your song. How much does that happen in your day to day life?

Summers: It’s kind of odd, where these things do happen. That was particularly brilliant and lucky that we got that right at the end, completely spontaneous, but it’s just day to day life. One thing about the music of the Police is that it just seems to be played constantly, say, in opposition to the Beatles or the Stones or Floyd or whatever, but it seems to be played everywhere in the world, constantly, it’s never gone away, and I’m talking about whether you’re going up an elevator in a hotel in Hong Kong or if you’re in Australia getting on the train. It’s always there, and it’s amazing. I’ll do an interview, get on the train, and as soon as I get on, the bloody music is there.

AllMusic: Do you have an absolute favorite?

Summers: “Message in a Bottle,” I think that summed up the Police the best.

AllMusic: Do you have a least favorite, or one you’re sick of?

Summers: There’s probably a couple in there, a few I don’t like. There’s a couple on Ghost in the Machine that are my least favorite, I think we were cast about a bit there.

AllMusic: Is there a song you wish could have a second life?

AllMusic: Before the Police, you had the brief time with the Animals. Do you still have fans who know you from the Police but want to talk about the Animals?

Summers: Not too much of that, but you get the odd stalker that comes around like that. They seem to all be based on New York, which is weird, I don’t know why that is.

AllMusic: What do you want fans to take from the movie?

Summers: I could give a cheeky answer, but I think you have to have a certain amount of faith, people always say, “How could you be in a band,” and all that, and it’s all the Hallmark clichés, you've got to really believe in it and not give up, if you really want to do it, and I think it’s gotten very difficult. You've got to do it from the most sincere place, which I did, but I think I was born in a more fortunate time when we sort of creamed the absolute pinnacle of the recording industry, which is very difficult now. But music is a calling, and music is the reward in itself, playing music. That’s it.

For more about Can't Stand Losing You: Surviving the Police, including when it's playing at a theater near you, visit the film's website.