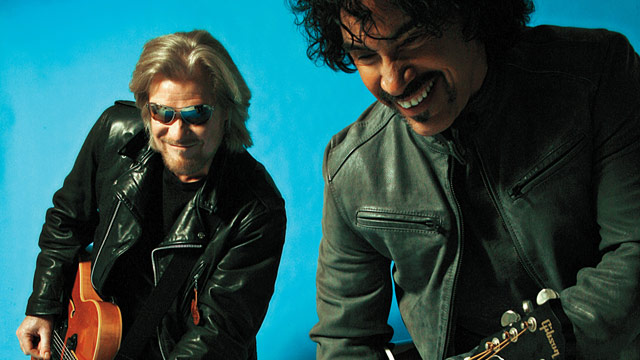 Even with their musical partnership spanning more than 40 years, Daryl Hall and John Oates had somehow never performed in Dublin until last year. The show has now been released as Live in Dublin, and is filled with the expected massive hits performed with disarming ease. It's a spot-on, no-frills representation of a veteran, bona fide Rock and Roll Hall of Fame act that delivers the demanded tunes without giving them merely perfunctory run-throughs.

We called up John Oates to talk about finding ways to keep the old songs fun, his renewed passion for playing guitar, and how he's one of the many guitar players helping rack up the view counts on YouTube guitar demonstration videos.

AllMusic: When watching the Live in Dublin DVD, one thing that really stood out to me was how comfortable you are onstage. How long did it take you to develop that in your early days?

John Oates: I've been singing onstage since I've been old enough to talk, or walk, pretty much. I started as a baby, literally. When I was three or four years old, I was singing, and my parents used to literally take me to family functions and things and I’d always get up and sing songs. Then as a little kid, I was a child performer, I did shows all around the Philadelphia area growing up, and I did talent shows, variety shows. I had a band starting in sixth grade, I worked my way through high school and college playing in bands, so I've been onstage my whole life. I feel just as comfortable onstage as I do walking down the street, so there’s really no difference to me.

I definitely get more pumped up and excited in certain situations, like when I do a solo show and it’s the first time I’m doing new music, I’m on my game and on edge. Or if it’s like the show in Dublin, where we filmed the DVD, I was pumped up for that because I knew we’d never played there before. After playing together all over the world, I couldn't believe we’d never played Ireland, so there was a special feeling in the air. In general, when I’m onstage, I’m pretty much at home.

AllMusic: You've played a lot of these songs thousands of times. How do you keep them interesting?

Oates: We have a really big problem, we have a lot of good songs. I don’t say that in a boastful manner, it’s just a matter of fact. We have some really great songs to play, and we have a lot of songs to play, so we get to change our set around, and we have a lot of hits people want to hear. So how I judge a good night onstage or a good performance is totally based on what happens from a technical point of view, meaning am I hearing myself well, am I playing well, is the band playing well, is the audience going crazy, are they responding. When all those things come together, it’s a great night. It doesn't matter if it’s Toledo, Ohio, or Paris, France, or New York City or some small town in Arizona, it makes no difference to me. If people are digging it and the band is playing good and I’m feeling good, then I’m happy.

AllMusic: And from a guitar player's perspective, are you able to mix things up?

Oates: Yeah, I mess with my gear, I add things to my pedal board, I change amp combinations, I’ll bring out different guitars on different tours, and in general, it’s really all about…the bottom line is if I’m hearing myself well, I had a great night. If there’s technical problems, then it’s a struggle, but other than that, it’s all good.

AllMusic: Particularly on your recent solo albums, you're using some different guitar tones and styles of playing.

Oates: I feel like I’m improving every day on guitar. I actually rededicated myself to playing guitar around 10 years ago, I had a shoulder operation and it was a wake-up call for me. It was one of those things where if one little thing goes wrong, you’re done, and I just started saying to myself that I didn't want to take it for granted anymore, all the time and skill that I’d developed playing guitar, I felt like I could take it to another level. Another aspect of it was moving to Nashville and playing with some of these musicians, they’re just so good that I felt I had to raise my game. I so I rededicated myself to playing over the last 10 years and working on my sounds, especially my acoustic guitar sound, really getting things the way I want, new instruments, pickups, amps, everything, there’s so much to it. In terms of wood shedding and playing and practicing, I've definitely ramped it up.

AllMusic: As a newcomer to your catalog, and I was impressed by how a song like "Out of Touch" doesn't sound fixed to any particular era.

Oates: That’s the art and craft of songwriting. When you’re a songwriter, your ultimate goal is to write a song that stands the test of time and transcends fads and styles, if you can do that, you've succeeded. That’s a very lofty goal, and that’s the way…every time I go to write a song, that’s where I set the bar. I don’t always hit it, obviously, but a song like “Out of Touch,” “She’s Gone,” those are 30 and 40 years old, and they sound just as fresh as the day we wrote them, and that’s what good songwriting is all about.

AllMusic: Are there any songs from the back catalog that you haven't been playing that you want to dig back out?

Oates: Absolutely, and that’s one of our biggest dilemmas, how do we do all these amazing songs that we have, and then some album tracks, deep tracks that go beyond the hits? We have a lot of hits we play in our concert and there’s not a lot of time to put all the extra songs, but we've been considering doing an entire tour of deep tracks, and we’re thinking about a way of doing a show like that, because we feel like we have a lot of music that goes way beyond all the number one records.

AllMusic: Or there's the option to play full albums live.

Oates: It makes perfect sense. It’s definitely a direction we want to go, it’s just a matter of carving out the time to do it.

AllMusic: You mentioned rededicating yourself to guitar. Do you have one in your hands every day?

Oates: Pretty much, the only time I don’t play is if I've been playing so much that I need to physically rest my hands. Acoustic guitar playing is a lot more demanding than electric, and with my solo shows, I do a lot of acoustic guitar playing, so after two or three shows in a row, my hands get pretty sore. It’s like an athletic thing, you can work out, but you can’t work out every day, you have to take some breaks, some recovery days.

AllMusic: Do you have any tricks to stay limber?

AllMusic: What do you tend to play, is it always in the service of writing or do you just noodle around?

Oates: Any combination, sometimes I’m writing, sometimes I’m playing scales, sometimes I’m going over chord changes for a song I’m not that familiar with and I want to bone up on, or someone sends me something that we’re going to record or do a project together, or I’m learning someone else’s songs, all those things in combination really keep you on your toes. I’ll go out of my way to learn brand new songs, like I went on a bossa nova kick about a year ago, I learned three [Antonio Carlos] Jobim songs on YouTube, just for the exercise in doing it.

Oates: Sure, because that’s the easiest way to do it, and the thing is, I have the skill to do it, I just have to see what it is. A lot of times, the biggest problem in YouTube is filtering through all the people who don’t know what they’re doing and pretend they do, to be able to discern who really knows what they’re doing and only pay attention to them.

AllMusic: I bet amateur musicians will be amused to hear that someone as accomplished as yourself is watching playthrough videos, just like they are.

Oates: I think the difference is I can tell the difference, I can listen to someone for 15 seconds and go, “This guy has no clue,” and go to the next guy and say, “OK, he’s pretty good,” or I can hear a different arrangement by someone, especially when it comes to learning jazz songs, because there’s a lot of different interpretations on how to do things.

Live in Dublin can be ordered via Amazon.