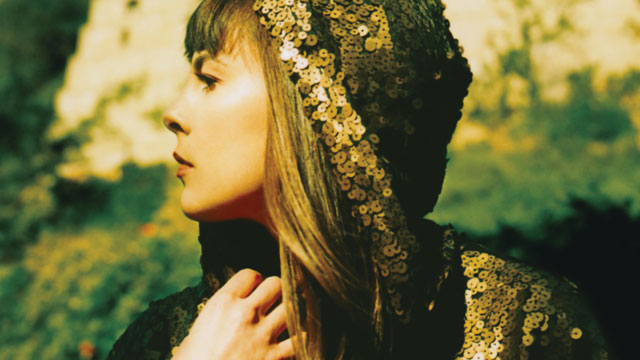 Electronic pop musician Madi Diaz brings her latest album, last year's Phantom, to the east coast this week for a set of shows in Boston, New York, Connecticut and Philadelphia. Phantom was unanimously labeled a "break-up album" upon its release, but Diaz explained to us why there's more going on than that, how she's learned to focus better onstage and the two very, very different musical acts she would listen to while biking in Boston.

AllMusic: When the album came out, it was almost universally labeled as a "break-up album." Did that feel narrow to you?

Madi Diaz: I think it’s a bit pigeonholed, but people like to grab onto a story. In writing the record, I had my own story that I was grabbing onto and holding onto, and it made the writing come through more, so I understand why people would call it a break-up record, and it definitely is a break-up record, but I think that the songs speak more than that, and they move beyond that.

AllMusic: And it seems to come more from a place of strength than vulnerability.

Diaz: Definitely, that’s my intention with my writing, trying to push myself and my writing to pull me beyond thinking about just that specific story, thinking about emotions and speaking to the dramatics of it, I try not to. I made myself stronger in that process, so I was lucky.

AllMusic: Getting used to being onstage can be a really difficult thing for some musicians. How has that comfortability grown for you?

Diaz: I think that’s the rad thing about performing. Obviously I’ve gotten better at it and more comfortable with it over the years, but it’s always a little bit uncomfortable, always a bit vulnerable, and pushing and pulling with that confidence and that strength, that is what makes performing so interesting, it’s a big psychological obstacle course every time.

I think I know how to ground myself better than I ever have before, I think there are ways that I use to keep myself in the moment onstage as opposed to standing onstage and wondering what that guy’s doing over there, what’s that over there, and if I get caught up in that I don’t get caught up in the energy and I take myself off of the stage while I’m onstage, so there’s definitely differences that I’ve learned to put myself out there more onstage.

AllMusic: You've mentioned an affinity for Tool singer Maynard Keenan, and they're a band you don't have much in common with musically. What are some other artists you admire outside of your style?

Diaz: I’m into a lot of different stuff, I grew up on the Beastie Boys and Madonna and the Talking Heads and Frank Zappa. I don’t have the patience to write prog music, it makes me totally crazy, but I love listening to Close to the Edge and Fragile, Fragile is an amazing record, or Frank Zappa, Joe’s Garage, that’s one of my favorite records in that genre.

Or King Crimson, I’m a big King Crimson fan. I love how Robert Fripp plays in a shroud of darkness, he’s always in the back. I saw him in 2006 or 2007 at the Tower Theater in Philadelphia, and it was just so rad. He’s always next to a giant rack of gear, a nine-foot tall rack of effects and pedals all around him, like a spaceship but not a put together spaceship, a spaceship that’s falling apart around him, and he’s figuring out how to put it back together, pushing all the pedals, and he never gets the spotlight, he’s never in the light, just behind everybody else.

I love this band Bongzilla, they’re this stoner metal band, they play so deep, like drop C. They’re awesome, I used to ride my bike around Boston listening to Bongzilla and Three 6 Mafia, those were my two bike-riding jams. They just put you in the total zone while cars are flying by you, you’re tranquil.

AllMusic: As a kid did you have music that you'd use to try to intentionally annoy your parents?

Diaz: I totally did, mine was Korn’s first record. I love Korn, those first few records are really good, up through Follow the Leader. After Follow the Leader, it was all just awful. But that and Silverchair, the song “Israel’s Son,” and Hole’s Live Through This. It was never to piss them off, it was just to let them know that I was angry. There was no music my parents could hear where they were like, “I don’t really get that,” they understood, which was frustrating. I had to tell them what was happening with what I was listening to.

AllMusic: Is there any music from your childhood that you've maybe realized since then isn't so great, but you still defend it for sentimental reasons?

Diaz: No, I’m pretty sure it’s all still pretty great. That Hole record is pretty much that, and I was in love with No Doubt’s Tragic Kingdom record, so much, and I listened to it for the first time in a really long time on tour a couple of months ago and was like, “Nope, this is still solid, it’s super strong.” That Third Eye Blind record, it’s self-titled, that record, the songwriting is still solid, totally brilliant pop songwriting. It still totally stands on its two feet.

AllMusic: What's a song that you think is perfect?

Diaz: I think one of mine is “This Woman’s Work” by Kate Bush, it’s gorgeous, it’s a beautifully-crafted song. The melody moves so effortlessly, but so intentionally.

AllMusic: Is that something you aspire to in your own work?

Diaz: I’ve never verbatim tried to replicate it, but yeah, I try and make it effortless, I try to keep it intentional, I really love something that catches your ear and takes you off of your feet but also catches you.