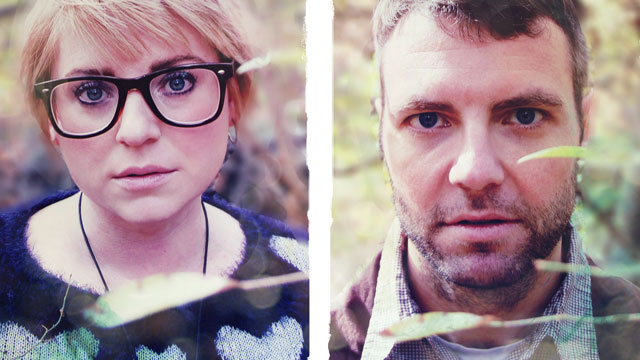 The husband and wife duo of Jen Johnson and Mike Latulippe have been playing together in rock bands for a while, but recently they got the wild idea to set down their guitar and push aside the drums and delve into the world of synthesizers and programming. The experimentation resulted in a new band, Pale Hands, and a debut album, Spirit Lines, which we're premiering here. We also talked to the couple about re-learning how to make music with a different set of tools, expanding the chillwave sound into a more song-oriented style, and the influential hard rock album Latulippe has heard countless times.

AllMusic: After playing rock music for a while, how did you end up in this style for Pale Hands?

Jen Johnson: We’re in another band where I play guitar, and it’s more of a guitar-driven band, and I had some songs that didn't really fit for that project and I wasn't sure what to do with them, so I had them sketched out and handed them over to Mike, and he did some amazing production things on them. We weren't sure what we wanted it to sound like at first. The first song we worked on was “Fanatic,” and we knew we wanted it to have a certain clarity to the presentation, we wanted to really have a strong point of view, but we weren't looking towards other music to reference.

AllMusic: And this isn't really the kind of music you can necessarily get in a room and jam on.

Mike Latulippe: I’m a drummer, so in a rock band, it’s exciting to just make a lot of loud noise and have a wall of guitars and wall of sound that you can sometimes get caught behind, and this was a different approach, so there was definitely a change in attitude to come from a big, loud rock band to something a bit more delicate and intricate.

Johnson: Learning how to play these songs live with just the two of us has been really interesting. Our main goal is to have the vocals pretty present and to have everything fit in its prescribed place, so it’s a much more…it’s not totally layers and layers of guitars or synths, even though I think there are a lot of things there, but we’re trying to keep a clean sound to it.

AllMusic: Instrumentally, it sounds like you opted for using only synthesizers, drum machines and vocals.

Latulippe: That’s what we ended up going with. Initially my thought was that there would be live drums on it, but the more we got the feel for the songs, it felt right to take this approach of more constructed drum machine type sounds. This is the first time we've dabbled in sampling and using other sounds.

Johnson: There’s a lot of samples of bird calls and animal sounds that we twisted and tweaked, and there’s a lot of vocal samples that are twisted so that the voice in that context becomes more like an instrument, that’s something we really wanted to do. It’s like taking organic sounds and making them inorganic, in a weird way.

AllMusic: What are some musical styles you love that you don't think you'd be able to pull off?

Johnson: I am a sucker for pop music, but whatever comes out of me is filtered through my personality and experiences and ear, so it’s never going to come out as super poppy, it’s never going to be a Katy Perry song, but I have a soft spot for stuff like that.

AllMusic: There are some sounds on the record that definitely remind me of some '80s artists, but the album isn't a throwback on the whole. Were you listening to more recent or older music when putting it together?

Johnson: I grew up being a classical musician and I spent a lot of time in that world, so I think I have an interesting seat at the musical table in terms of what’s around, but I will say that in terms of recent stuff, we love the Com Truise synth sound, they’re beautiful, and I've always been a huge fan of School of Seven Bells, the Alpinisms record, it opened my eyes and ears to something that sounded fresh and new, and we don’t copy that, but that inspired me. Also, the first Neon Indian record, just in terms of the vibe. We’re trying to take some of these tools, chillwave tools and synths, but turn them more into songs, put our spin on it.

AllMusic: What's the album that you think either of you have heard more times than any other?

Johnson: You listened to a lot of Tool, be honest.

Latulippe: Yeah, I have a bit of a heavier background, and Tool has always been one of my favorite bands. I think the record Ænima, if you looked at my lifetime, that would be number one. I had it on repeat. Going back to the kind of music that I want to create that I couldn't, being a drummer, watching Danny Carey, they drummer from Tool, I love the way he plays and one day I’d love to be able to play some of his parts.

AllMusic: Is it something you still listen to or did you grow out of it?

Latulippe: Every now and then, but it’s not something I listen to regularly anymore. It captured my imagination for a time, and as a musician, it had a big influence on me playing drums, so it definitely left its mark on me, for good or ill.

For more on Pale Hands, visit their site.