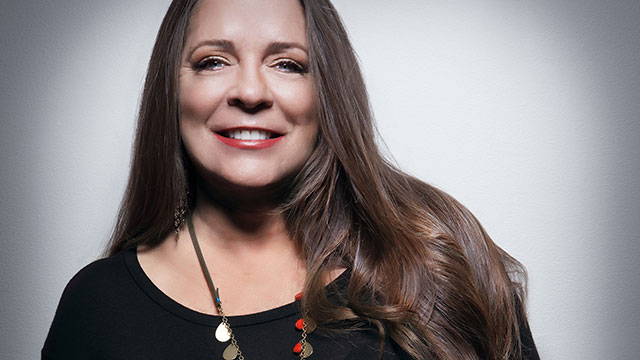 As the daughter of June Carter and Carl Smith, and later the step-daughter of Johnny Cash, Carlene Carter grew up surrounded by music. Whether it was hearing songs from the Carter Family innumerable times or spending time around the Grand Ole Opry and The Johnny Cash Show, she has lived a truly unique musical journey that reads like a who's who of the past 50-plus years of popular music. Her new album, Carter Girl, gets back to her family roots, with every song featuring a Carter somewhere in the writing credits, as well as appearances from family friends Willie Nelson and Kris Kristofferson. Carlene Carter called us up to talk about the new record and to relive some of her fondest childhood musical memories, including the time Steppenwolf inadvertently led to her being grounded by the Man in Black and what records she wore out on her turntable.

AllMusic: Before we go back in time, let's talk about my favorite song from your new album, "I'll Be All Smiles Tonight."

Carlene Carter: I knew that song all my life, and usually my aunt Anita was the one who sang lead on that. She just did such a beautiful job that I used to sit or stand onstage with her, in awe of how beautiful she sang it. I did it to honor my aunt Anita, because I looked back and was trying to do something for all three generations: pick a song of mom’s, pick a song of Helen’s. I was a little bit intimidated by singing it, but then I wrapped my head around the fact that I wasn't just singing these songs as somebody covering them, I was singing them as I wished I had written them, and by doing that I was able to find my own place and not try to re-create it. It is just an amazing song and I could totally relate to the unrequited love and watching somebody that you love be with someone else. I could go back into my memory banks of having been in a similar situation myself, and just keep on smiling no matter what.

AllMusic: Now let's take it back. We had you come up with a list of songs that featured prominently in your childhood, and you mentioned that Elvis' "Mystery Train" played a big role.

CC: I can’t say that I absolutely remember this memory, but apparently when I was a baby if I wouldn't go to sleep my mom would put “Mystery Train” on and dance around with me in her arms to get me to go to sleep, so I would fall asleep to Elvis singing “Mystery Train.” I guess that was my first musical influence. Now it doesn't make me fall asleep. I really don’t remember it, I just know that it had an effect on me, according to her.

The Yardbirds - "For Your Love"

CC: I got a dollar a week for mowing the yard, and I’d save up my money and just buy records. I would go down in our little play room in the basement where I had a little battery-powered record player, and I must have worn out the Yardbirds like crazy, listening to “For Your Love” over and over again. I don’t even know how old I was, I just remember that being one of the records my mother brought home. She was great about broadening our education musically, having all kinds of music in the house, and I never really thought, “This is country, this is rock, jazz,” I just think all music relates to human beings, and I know all different kinds of music have been part of my life.

The Monkees - "Last Train to Clarksville"

CC: I loved the Monkees, that was one of my go-to bands, so I was a Neil Diamond freak, too, and didn't even know it, with “I’m a Believer.” I loved “Last Train to Clarksville,” I listened to that a million times. I just loved pop music, well-crafted pop songs that had catchy things to them. The Monkees came to our house once; John gave them fishing poles and we all went down to the dock on Old Hickory Lake. I remember Davy Jones saying, “Oh, I think I’m on to a biggie here,” he thought he was going to catch a big fish, and he caught this teeny little fish. I think it was my first time that I ever blushed in my life; when they left he kissed me on the cheek and I about had a heart attack.

Skeeter Davis - "The End of the World"

CC: Skeeter Davis was on the Opry and was friends with mama, and many years later she was living with Joey Spampinato from NRBQ and came to my house for dinner. She said, “I changed your diaper when you were little,” and it was just so bizarre. I've had that experience quite a lot with a lot of people who, I guess, changed my diaper. Someone who wasn't really a musician but was very big at the Opry was Minnie Pearl – Sarah Cannon – and Sarah and her husband Henry used to babysit me, as did Hank Snow’s wife, she was my grandma’s best friend. So I had some pretty cool babysitters growing up.

Steppenwolf - "Born to Be Wild"

CC: One of the first concerts I went to was Steppenwolf, which was at the Municipal Auditorium in Nashville. I was maybe 14 or 15, on my first double date, and went to see Steppenwolf and I got home late and got grounded for three months. It was never that you’d get grounded for a week, you’d get grounded for three months. I got home a little too late, according to John, and he was pacing the halls waiting for me. I went straight home, there was nothing to it, but I got in trouble. I think he just didn't want to let his girl go. The day after the concert, I looked out my bedroom window - we had a gate that came into our driveway with a guard out there, because things were really kooky - and this limo pulls up and I see these guys getting out of the car, and obviously there’s John Kay, and I’m like, “Oh my gosh, Steppenwolf’s here!” They had just decided to drive up to John’s house and say hello, but I wanted them to tell him what time the concert ended so he’d know I hadn't gotten into anything I wasn't supposed to.

CC: So the next concert I go to is Elton John. Kiki Dee opened for him, and that’s when "Don’t Go Breaking My Heart” was big. It was at the Municipal Auditorium in Nashville, and little did I know that many years later, Kiki and I would become the greatest of friends because we were in a musical in London together for over a year called Pump Boys and Dinettes, and we played sisters. I thought when she did “I Got the Music in Me” and sang with Elton, that made her one of my go-to heroes. Her and Linda Ronstadt, those are my favorite two. She taught me a lot about how to sing and take care of my voice. We had to do eight shows a week, and I’d never really worked like that, so I had to learn how to pace myself and do my breathing, and she told me a lot of valuable things to give me stamina on the road. She was awesome.

CC: When I was 12 or 13, we went to the Troubadour to see Kris Kristofferson open for Linda Ronstadt, and they let me and Rosie come in, because we were with mom and John. We watched Kris and he was awesome, that was one of my first experiences in the presence of a real singer-songwriter - not that John wasn't - but somebody that just got up there with their guitar, they didn't have a band or anything, and just delivered. When Linda came on, I’d always loved “Different Drum,” which I believe Mike Nesmith wrote, and she came out and had a tambourine and miniskirt, and I said, “When I grow up, I’m going to do that.”

CC: I loved the Jackson 5 as a kid, particularly trying to learn those dances and the stuff they did. We didn't have video where we could keep watching something over and over again to learn how they did their moves, but there was a lot of pretending that we could do that. Me, my little sister and our neighbor, the girl who was my best friend, we’d do these things where we’d mime to their records. I do remember one instance when they and John were on the same show together, and they’re walking through the hallway and John meets the Jackson 5, and Michael Jackson goes, “Johnny Cash, Johnny Cash, hotter than a pepper sprout.”