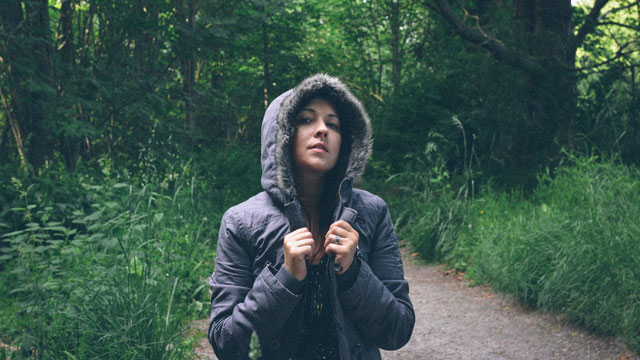 Seattle musician Jen Wood has been making music for 20 years, from her beginnings in the riot grrrl scene with Tattle Tale when she was just 15 to her appearance on the Postal Service LP and her own solo albums. Her latest, Wilderness, is out on October 14, and finds her shifting from her guitar roots to a piano-centric sound that carries throughout the album's 10 gentle tracks, accompanied by subtle electronic flourishes and her confident voice. Enjoy our full stream of the album and read our conversation with Wood about why she ditched the guitar after 20 years and what she listened to in eighth grade.

AllMusic: The biggest change for you on this album was shifting to a piano-centric sound. What spurred that change?

Jen Wood: I've always written songs on guitar for 20 years, that’s my primary instrument, and I just totally hit a dead end with it, and I put it down. I wasn't excited about it at all anymore. Around that time, my husband and I had gotten this house and we decided we really wanted to have a piano, so we did some piano shopping, and I found this gorgeous 1920s Whitney piano, and the minute I sat down at that piano at the shop, I had a really cool connection with it and I was like, “This is the piano, this is the one." We took it home and I sat down at that piano and couldn't stop writing on the thing, I just wrote and wrote hundreds and hundreds of songs. It totally drew something new out of my creative soul, and it caught me by surprise, it wasn't part of my plan, like, “I’m going to make a piano record!” It’s been a wonderful surprise.

AllMusic: That has to be pretty daunting, getting out of your comfort zone like that.

Wood: That was really fun, I loved the challenge of learning a new instrument, and it pushed me to work harder. With guitar it felt like I’d plateaued a little bit, so this was intimidating and frustrating, because there were things I was hearing in my head that I wanted to play that I couldn't play, so it forced me to really put in a lot more hours into it. It’s been really cool, now I feel really confident playing it. I still can’t play Bach or anything.

AllMusic: The album sounds like it needs to be listened to in one sitting, you can't just dip your toe in. If you are in the mood for one of these songs, you're probably interested in 10 of these songs.

Wood: This album chronicles the last six years of my life and what I've experienced, what people around me have experienced. So it’s telling a story, very much so, and looking back on my previous records, I’d say this is the first one that has that thematic feeling, that storytelling structure to it.

AllMusic: Who are some other artists you enjoy who make music that's more thematically linked like that?

Wood: Right now I’m obsessed with Jenn Ghetto’s record, Cool Choices, I’m really digging on that [Ghetto also plays guitar in Wood's touring band]. Elliott Smith, I’m a huge fan of his, I love how his albums have a story and a feeling to them, you want to listen to the whole thing, one song after the next, you don’t skip around. Aimee Mann has that vibe, the way she writes songs, and also the new Beck album.

AllMusic: Are you able to mentally flash back through your phases with music? Like if I said "eighth grade," would you be able to name what you were into then?

Wood: Eighth grade was before I started playing guitar, so I was a little Poindexter, I was a really good student, I wore penny loafers, I was trying to be preppy but didn't really fit in, I knew I was always creative and an artist. I was listening to Bobby Brown and Jody Watley and MC Lyte and Whitney Houston. Then you go into high school, and it’s so typical, that huge transition that you make from middle school to high school, so I was like, “Punk rock!” and I dyed my hair green and wore a chain around my neck with a lock like Sid Vicious. But in eighth grade, I was really into pop music, and I hadn't discovered my musical side, even though it’s in my family and my parents were classical musicians, the hippie liberal types. It was in high school that, like most kids, I got angry at the world.

AllMusic: What happened to your eighth grade records, did you keep them around and secretly listen to them sometimes?

Wood: I threw it all out.

AllMusic: All at once?

Wood: Yeah. I was like, “I’m punk rock now,” and I was super anti-mainstream music. I was in Seattle, there was so much cool music happening, and I feel lucky that I grew up in the city. I started to realize there was way more interesting stuff happening here than what was on mainstream radio. Then I started playing guitar and got into the riot grrrl thing and this whole new wave of feminism that was really exciting, and I have to give a lot of credit to those ladies and for that community, because they lifted me up and gave us a platform where we could be safe and have a voice in a very dude-centric scene. If we went year to year, it would be some pretty big changes.