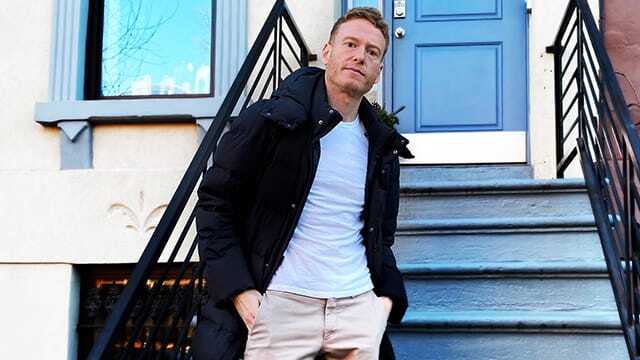 Now in his twentieth year of cutting solo records, singer-songwriter Teddy Thompson still loves mistakes. Whether it's a wrong chord that takes a song in a new direction or a flub in a live performance that adds that extra bit of humanity, perfection is not his aim. On his latest, Heartbreaker Please, Thompson sings of seeking happiness, avoiding bad music, and the transporting power of love, aided by a few fortuitous mistakes along the way.

Along with offering an advance listen to Heartbreaker Please, out May 29 through Thirty Tigers (pre-order available), Thompson spoke with AllMusic about the struggles that came with producing his own album, the origins of a few of its songs, and the time he took his mother -- folk-rock legend Linda Thompson -- to a particularly fantastic Stevie Wonder show.

AllMusic: It's been a while since your last solo album, had you been writing these songs all along or more recently?

Teddy Thompson: I tend to finish things when they need to get finished, so I had some of these songs for a while, and some of them were in bits and pieces, and when it came time to start thinking about making a record, then I finished them up. Most of them are not that old. I think of them all as new songs, and then if I really sat down and thought about when I began one of those songs, I might be shocked by when that was. But I choose not to look at it that way, they all seem very fresh to me.

AllMusic: How was the experience of producing your own album?

Thompson: When I began, it was more out of necessity. More and more artists these days, myself included, just can't afford to have a producer, and I've produced some records for other people, so I began and thought, "Yeah, I can do this," and then quickly regretted it, because it's difficult. Basically, you can't sing and listen at the same time, is what it comes down to, so the way that I like to record is quite live, especially when it comes to my own performance, and I found it was very difficult to have to stop and listen to what I'd done to see if I was on the right track, rather than having someone in the control room going, "No, do another one right now." So it messed with the flow a little bit, and it's not for everyone. I'm not sure I'd want to do it again like that, because it slows things down.

AllMusic: Did that make it feel more like work?

Thompson: Totally. And that takes a bit of the fun out of it, you can't just be the artist and think about giving a good performance and being musical, you have to think about other things, too. So yeah, it's definitely a challenge.

AllMusic: Were there responsibilities you hadn't taken into consideration when you started?

Thompson: Yeah, dealing with paying the musicians was one of those things. I've dealt with it in the past, and it's definitely a reality of making records with other people, but it's definitely something that's an aspect of working on a record that you don't really want to be thinking about while you're in the middle of making musical decisions, like having to write checks to people and stuff like that definitely takes you out of the creative mind space for sure.

AllMusic: "Brand New" was a track that especially jumped out to me, what was the earliest seed of that idea?

Thompson: That was a song that was written very quickly, which was not true of all of them, and was later in the process. It was one of those situations where I was humming the beginning of the tune, maybe just the infancy of the verse, and I went to the wrong chord, and the tune that I already had for that beginning, it worked over that wrong chord, and to me it was something different, it was one of those nice moments where you go, "Ooh, that's good." Then I finished it very quickly, and I'm a big advocate of making mistakes. That's why it's a good idea not to be too good of a musician, not too proficient on your instrument, because I feel like if you never make a mistake, it's hard to do something interesting or different.

AllMusic: I feel a lyric like "I just wanna have fun" isn't something you hear a singer-songwriter say very often.

Thompson: If I was going to analyze my own song, I remember that as being a moment, that lyric is a bit out of the ordinary, but definitely says what I was trying to say, and that's when you're on to something good, as a songwriter, when you find something that's just a little bit different and maybe a little bit wrong, but it works, and that means it's something new.

AllMusic: "Record Player" puts words to something a lot of us might feel, but we're scared of being called curmudgeons if we say it. [Sample lyric: "So I go to the dancehall/They’re not playing my song/They’re playing something sounds like/Fingernails on a blackboard"]

Thompson: That song is actually the only song on a record that's a co-write. I went to a songwriting retreat with other artists, and it was a situation where it was, "Day three, time to write a song with two strangers." But it was an idea that we all had together, we started it, and I went away and finished the song myself. It was a typical conversation you might have with other musicians, about how there's no such thing as background music for musicians, when you get into the back of a cab, you're like, "Fuck's sake…" You can't tune that stuff out. We just felt it was a topic that made sense to us.

AllMusic: It's been 20 years since your first album, does that anniversary mean anything to you?

Thompson: It hasn't, up until now. I certainly am not that self-obsessed, I don't even remember when my records have come out, someone would have to remind me. But it's true enough, when someone says, "It's been 20 years," it makes you feel old. But at the beginning of this year, I did my second record, Separate Ways, a couple of acoustic shows in New York of the full album, because it was like 15 years for that. So I did have the experience for the first time of revisiting a record that's really old, and then re-learning your own songs, which is quite a strange feeling. That was kind of interesting, to go back and delve into something you did when you were such a different person, such a kid, you come across things that make you cringe, and you come across things that make you think, "Oh, that's actually not that bad," considering I was only 23 or something. So it's weird, but I definitely don't dwell on it, I don't think about it. I'm always thinking about the next thing, as soon as I finish a record I'm thinking about what I could do better for the next one.

AllMusic: Have you attended many full-album performances like that?

Thompson: I think I've only been to one, and that was Stevie Wonder doing Songs in the Key of Life, whenever he started doing that tour, five or six years ago, I went to the opening night at Madison Square Garden, and I flew my mother over from London, called in every favor I possibly could think of to get good seats, and we went to see that, and it was maybe the single most moving musical experience I've ever had live, it was phenomenal. I can't find the words to express just how amazing that was, there's not enough superlatives. So my one and only experience with someone playing an entire record was basically the greatest experience I've ever had.

AllMusic: Have you gone back to watch any footage from that show, or did you feel it best to leave the memory alone?

Thompson: When he started doing the tour, he just did 10 shows, but then it sold out and he added more shows, and when he announced a show in Brooklyn, I went to that, and it was not as good. So I probably shouldn't have done that. It was still great, but the first show, I want to just leave it as it was. What was so amazing about that first night was that there were mistakes, and that made it so much better. There were wonderful moments of vulnerability, because they had never done this before. It was this enormous band, like 35 people onstage, and there were great moments where it wasn't an impersonal arena show that was overly slick, he stopped a song and said, "Sorry, guys…" and it was so moving to see that part of it, too.

Mark Lanegan's Memoir Gets to the Heart of a "Breakfast Cook Who Fell Into S ...

Mark Lanegan's Memoir Gets to the Heart of a "Breakfast Cook Who Fell Into S ...