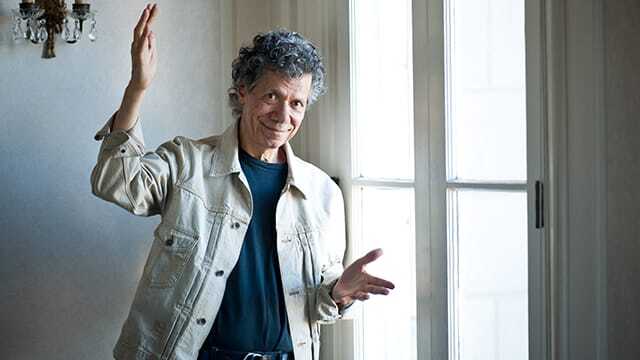 Jazz piano icon Chick Corea can and has performed in nearly every permutation of band, orchestra, trio, or combo one can imagine, but his forthcoming live album, Plays, finds Corea taking the stage by himself. Although alone in a physical sense, on this particular tour Corea came equipped with an extensive musical lineage, interpreting pieces by Domenico Scarlatti, Bill Evans, Frédéric Chopin, and Thelonious Monk, and illustrating the connections between artists, even if they're separated by centuries.

Corea kicks off the album by imagining a sort of musical conversation between Mozart and George Gershwin, letting one of Mozart's sonatas transition into Gershwin's "Someone to Watch Over Me." We're sharing an early listen to the Mozart section, along with our conversation with Corea about his long journey to finally appreciating Mozart, the artists he thinks do the best crowd work, and the quote that keeps him focused on what matters in his career. Plays is due August 28 on Concord Jazz.

AllMusic: When you are performing other people's music, do you apply a different energy than when you play your own?

Chick Corea: Not at all. For me, as a composer and as a pianist, they're pretty different functions. When I go up to play, whether it's my own composition or Mozart or Duke Ellington or whoever, I just take the theme of whatever it is and work with it. I was doing a class the other day, and one of the guys asked me, "Do you use a different piano touch when you play Mozart or when you play jazz?" I thought that was a pretty good question, and actually, the touch and the approach doesn't have much to do with whether it's classical or jazz, but more to do with what I'm trying to get across. I can play Mozart in a really raunchy way, or I can play it in a more fine way, and similarly I could take a song of mine and play it delicately as a more lyrical tune or with a heavy beat. So what I do as a performer is I do that with any material I'm working with.

AllMusic: How did knowing that you were going to segue from Mozart to Gershwin change how you wanted to play it?

Corea: That was a particular game I started developing doing lots of piano solo concerts. I found that when I would play a tune, then stop and talk to the audience and introduce another piece and play that, it would be one particular flow. But I found out if I just let my associative mind go from one thing to another, I would be playing Mozart and I would see the similarity in the lyricism of Mozart and the melodic quality of Gershwin, and I'd say, "That goes together," so I'd start putting two composers together to make one kind of two-movement suite. I thought it was a pretty cool experiment. In this particular rendition, I played the Mozart piece pretty straight, I put in a few embellishments, but I didn't improvise with it very much. The Gershwin rendition is completely my own rendition and improvisation.

AllMusic: Has your brain always sought out those connections?

Corea: I think it's a pretty common way of looking at life, you see one thing and you associate it with another. Another thing I've done is sometimes you can find an association that's really blatant, like there's this prelude by Chopin in E minor that's a very famous melody, and then there's a melody by Antônio Carlos Jobim that he wrote called "How Insensitive," and it's almost a direct rip-off of the first four bars of Chopin's piece, and I thought that was kind of cute. Jobim's songs and his melodies have always reminded me of Chopin and his way of creating songs, so if you go into it from a viewpoint like that, you can always see influences. I'm playing a piece by Bach, a C minor sonata or concerto, and a friend of mine found out that particular piece, even Bach himself said was highly influenced by Scarlatti, who was a contemporary of Bach's. So that's the way music gets formed, is we all take from one another and learn from one another, and that's how the culture of music comes together.

AllMusic: It reminds me of overhearing musicians talk to each other in the green room.

Corea: Exactly, that's exactly how an artist thinks, which is you draw from the culture that you're in, you're not a lonely guy out in space somewhere developing your own sound, you're part of this culture. The pianists and the composers that go back on my line of interest, back to Scarlatti and Bach and Brahms and Mozart, then to Ellington and W.C. and Stravinsky and Monk and Bill Evans, they're all along the same path. They're pianists that compose and perform and improvise. Bach and Scarlatti and Beethoven were great improvisers. The reason we're not highly aware of that is that there are no recordings, but when they wrote their music down, they had to fix it so other people could play it, but their modus operandi was improvising.

AllMusic: Throughout this whole live album, you're doing a lot of crowd work and engaging directly with the audience. Is that something you always were comfortable doing?

Corea: I started doing that more and more, especially on piano solo shows, because there's this big gap between me and the audience. First there's the distance of it, they're way over there and I'm up here, I'm all by myself and they're crowded together in a lump, and the spotlight is on me and they're in the dark. It's not a very conducive atmosphere to communicate. It's like if you were in the room with a couple of friends and you put them in the dark and you put a spotlight on yourself, and you were the only one talking. That's the sense I would get. So more and more, I started to ask that the lighting is even between the stage and the audience, so we're in the same light.

I like to play venues where the stage is more or less not so high up and is down, like the Roman amphitheater style, that's my favorite kind of venue. I would notice that if I just talked to the audience and said hello, maybe answered a few questions, had a back and forth, that it relaxed everybody, then I could go ahead and play and talk and play, and the whole atmosphere made me feel more comfortable, and I felt freer and more able to explore things, to go kind of wild up there. It's the communicative factor with the audience that I'm always trying to improve one way or the other.

AllMusic: Is there anyone whose relationship with an audience particularly impresses you?

Corea: Bobby McFerrin is the man. He's a guy who's able to go out, on his own, and create an incredible, relaxed rapport with a back and forth with the audience, and I think that's my favorite example of an artist who's in complete communication with his audience. Stevie Wonder is a great communicator, I think his rapport with an audience is fantastic. Different artists do it in different ways; Michael Jackson is a favorite of mine, too, but he didn't talk to his audience too much, and what he presented was this incredible production that he's now so known for. Every artist has their own way of doing it, but Bobby is at the top of my list as far as in live concert, that kind of rapport with an audience.

AllMusic: Did Mozart's music click right away with you as you were learning piano?

Corea: The truth of it is that I disliked classical music, the classical styles of Mozart and Bach, when I was young. When I was just studying the piano, I was into jazz, I liked Bud Powell and Horace Silver and Thelonious Monk. When I heard classical pianists play, it didn't inspire me that much, I thought, "That's not the kind of emotion that I like, I like more action and more rhythm."

It wasn't until I had an encounter that was memorable for me back in '81, '82. I was invited to this piano festival in Munich, and I was the only jazz guy there. I met this Austrian pianist there, Friedrich Gulda, he specialized in Bach and Beethoven and Mozart. He was also a jazz pianist, he could improvise and play some bebop. He was a wild man. I heard he wanted to meet me, and I said, "Great," and his friends said, "He wants to meet you on stage and you can play a duet together, all improvised." I thought, "That's a wild guy, I like that."

So we walked onstage together in Munich and sat down and played, and we went back and forth improvising. At one point, he launches into this piece of music that was obviously a written piece, so I just laid back at the second piano and listened while he played, and I was captured by what he was playing, it was this gorgeous theme and it held my attention all the way through [Watch Gulda's performance on YouTube]. After it was over, I went up and said, "That was a lot of fun, what was that piece you were playing, it sounded like some young modern guy trying to revive the classical style, but it was real fresh," and he looked at me and gave a "hmph" and said, "What, you didn't recognize that? That was Mozart!"

It was like a shock coming from the sky, a thunderbolt. "That was Mozart?" It woke me up, and a month later he sent me a mini-score of the Mozart piano concerto for two pianos, and he said, "You play the second part and come join me in Amsterdam at the Mozart festival in four months," and I accepted the challenge and we did it and a record got made, and I became a Mozart fan from that point. That was a memorable part of my life.

AllMusic: Were you embarrassed that you didn't recognize that piece?

Corea: No, it was like a revelation. "Wow, really, Mozart? Let me check this feller out." Since then, one of the things that has become kind of a real operating policy for me as a musician is when I'm studying, especially the written music of the classical composers, my reference is not the recordings of their music, but the original score, I go through the written music, because that's their communication, that's what they wrote down. They intended those notes for another pianist to play, so it makes me feel like I have a direct connection to Mozart through those notes. It's a really rich area of connection and research for me as a musician.

AllMusic: You've won a ton of Grammys, are you ever surprised by which of your recordings win and which ones don't?

Corea: You have two factors: you have individual taste, which could be anything, and you have the factor of the voting process. Even though it's amongst members, it's still a popularity thing. I have a quote on the wall of this room here, it's a quote from Béla Bartók, one of my favorite all time composers and musicians, it's a photograph of him with a serious look on his face, and he says, "Competitions are for horses, not artists." It's a harsh statement, and I don't state it that harshly, but I do feel that way about competitions and popularity. It's fine for someone to be popular, all that's good, but doesn't define everything that's good or valuable.