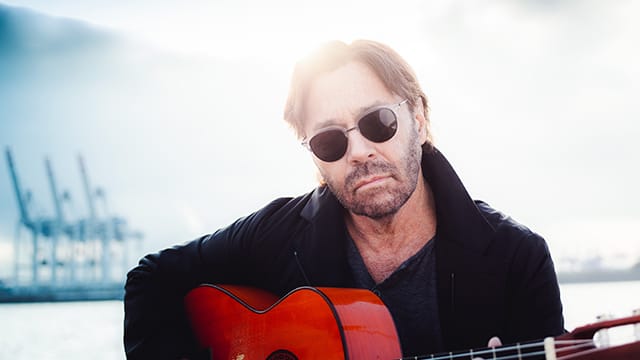 When jazz fusion guitarist Al Di Meola first took on the music of the Beatles in 2013, he went to Abbey Road with his acoustic guitar and emerged with characteristically intricate renditions of songs like "Because," "Being for the Benefit of Mr. Kite," and "She's Leaving Home." For the follow-up, Di Meola made a few changes to his approach. With his full set of tools at his disposal, he implemented a much wider range of sounds and expanded the scale of the album's production, while intentionally hewing closer to the melodies of the original songs more than on the first album.

The result is Across the Universe, which takes on 14 more songs from the Beatles catalog, from standards to deep cuts. And while Di Meola takes pains to keep the songs' recognizable melodies intact, that doesn't stop him from cracking many of them wide open and taking new musical adventures, as when he expands the typically 2:05 "Norwegian Wood (This Bird Has Flown)" into a six-minute journey.

Di Meola shared the background of his interpretation of "Norwegian Wood" and many of the other songs on Across the Universe with us, along with why he changed his approach, why it's important for him to go beyond merely covering the songs, and points out some key things to listen for. Across the Universe is out March 13 on earMUSIC and is available for preorder.

AllMusic: When you sat down to re-arrange these songs, did you set any rules for yourself?

Al Di Meola: When you listen, there are certain sections you just expect, and I thought, well, those should be there, and then there's certainly parts that I felt like I could expand on, so I wrote some parts to extend them.

A lot of the songs of the Beatles felt to me very complete, because they had a voice, they had lyrics, and it was fine that the songs were two, three, four minutes. But as an instrumental, without the voice and the lyrics and the fact that it was me making the record, I felt like I had to give it something else, and not do a cover of the song, but my own interpretations.

AllMusic: "Norwegian Wood" feels like the one where you took the most liberties with the original version.

Di Meola: Basically, the whole world knows that melody, but the original is under two minutes, so I said, "What if I could just keep this beautiful idea going?" You don't have John's voice or the lyrics, but I felt a strong need to extend, in an original way, some parts, but then to keep returning to or suggesting that it is that song.

There are times when it goes off on a tangent, for sure. That's maybe the most adventurous piece, in terms of extension, but that's the way it goes. I had no guidelines or parameters of restraint, because I basically played most of the instruments except tabla, and I recorded it in my own studio, so I could take it wherever my inspiration was leading me at the time.

AllMusic: Did you set out to take a different approach than you did with your first Beatles tribute album?

Di Meola: I have my own studio and my own instruments, which was a difference between this record and the first tribute record that I did at Abbey Road. There, I didn't have my arsenal of equipment, but I liked that I had only my acoustic guitar. And that was a good thing, to not get into overdubbing and having a lot of musicians coming in. Doing it this way, I wanted to do a bigger production record, and I wanted to take my time and do it the way I wanted, so that's why we have songs that go off on a tangent, with different sections within the piece.

AllMusic: Are you of the mindset that if it's not challenging, then it's not worth doing?

Di Meola: It's very important. "I'll Follow the Sun" is one where the Beatles did it in a very simplistic and right to the heart way, but I couldn't do it with the same approach. It's not my style, so I wanted to blend in the things that are kind of trademarks of what I do. I do that with my own music, I syncopate rhythms and make things more complex. On this record, I wanted to keep the melodies intact, even though the underpinning arpeggios were a little bit more adventurous.

AllMusic: Was there a sense that as you pulled apart these songs, you might start to crack their code?

Di Meola: If you listen to the rhythm guitar on "Hey Jude," which is on the right speaker, I'm syncopating the actual harmony. The way Paul played it on the piano, he's just playing quarter-note chords, and he's just hitting it that way the whole time. It's beautiful that way, but if I did that, it would not be as beautiful, because it would be almost a little corny. So your attention would go to the guitar, and that would be weird.

So to make it original and bring something new, some new life to it, in my way, I had to do what it is that I do normally. I didn't displace the melody this time on this record, overall, as much as I did on my first one. So it was a conscious effort to stick close to the melody and change the other parts and try to bring some originality to all the other aspects of it.

AllMusic: Was that based on feedback to the first record?

Di Meola: I like the fact that on the first record, I would displace melodies, or the melodies would be hidden within chords. But for some people, they didn't get it on the first listen. It was almost a bit avant-garde in some places. This time I wanted to get closer to having people zone in on, "Oh, that's the melody, we know that's the song." So it was a conscious thing.

On the first record had something like "Michelle," where you can hear what I'm talking about, and I love how it came out, but if I had to do it again, I probably would have thrown in a couple of places where we spell out the melody in a simplistic form. On this record, I have places where I just drop out the arpeggiated part and play the melody by itself for a certain amount of time, like on "Mother Nature's Son," just the melody. There are places where it's very effective musically to do that.

AllMusic: Were there songs you wanted to do on the first volume but didn't have the right ideas until this one?

Di Meola: Yeah, for sure. "Strawberry Fields" is a very important piece, and "Golden Slumbers" was always extremely attractive, but it's another one of those two-minute or less pieces. But it's so beautiful, and I started out playing a very different, original way to play "Golden Slumbers," and then I listened again to the way the Beatles did it, and I loved they way they did it, so I said, "I'm going to find a way to use both parts." It wasn't easy to make it work, but you have to listen to it in those terms to know what I'm talking about.

AllMusic: Is there a moment of breakthrough when you figure it out?

Di Meola: It was going in my direction to a point, but when you go back to the way they did it, there's charm in that simplicity, and I wanted to get that charm of how they did it. My tendency is to change things rhythmically, so I had both going on at the same time in different speakers, so you can really pick out, "There's the syncopated original version, and the take on how they did it on the other speaker."

It's slightly different, but almost the same. That's a pure melding of both, their way and my way. That was not easy to do, because I started with the harder version, I didn't start with theirs and then just do something on top of it, I started with my own version and much later I said, "I wonder if there's a way I can put in those very important parts that people remember."

AllMusic: Do you find different eras of their catalog are better suited to your style of interpretation?

Di Meola: As time went on, their music got more interesting, production-wise, and compositionally, they got more adventurous and did a very smart thing by quitting touring. Magical Mystery Tour and Sgt. Pepper and the White Album were the most influential to me in terms of the depth of writing and production. That's something that's happened to me, I've become drawn to revisiting that era, where I was not so much a fan of their solo stuff. After 1969, that's when I went more towards jazz and the direction I'm known for. It's only been in the last five, 10 years that I've come back to listening to the Beatles and realized it's as deep as I thought it was when I was a kid.

AllMusic: Are you already thinking about volume 3?

Di Meola: I couldn't follow this up next with volume 3, if there ever is a volume 3. It would depend on the success of this one, because the first one was really successful and made this one an obvious thing that I had to do. But I'd separate it. If I did 3, which would be fun, I'd have to wait a while, at least another couple of original records first. There's plenty of songs I'd still like to do, so you could do a 3 and a 4, there's so many great pieces.