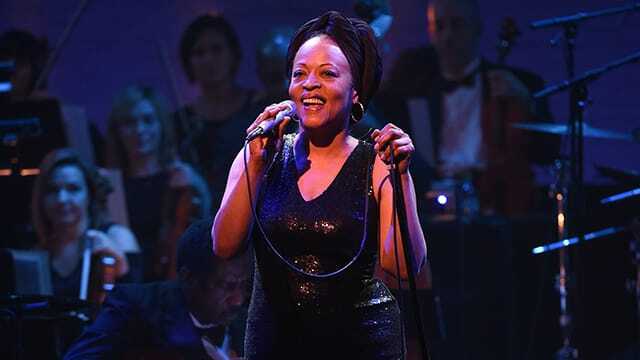 In 2016, Grammy-winning producer Gregg Field put together a centennial tribute to Ella Fitzgerald at the Apollo Theater. More than just an appreciator, Field had experienced Fitzgerald's monumental talent up close as her touring drummer in the mid-'80s. The lineup that night featured Patti Austin, Lizz Wright, and Cassandra Wilson taking on some of Fitzgerald's defining songs, with backing from the Count Basie Orchestra.

Fitzgerald had been performing "Cry Me a River" for at least five years before recording it for her 1961 album, Clap Hands, Here Comes Charlie!, and continued performing the song for decades. And when it came time to pay tribute at the Apollo, Wilson heard Field's arrangement and knew she was in good hands. She spoke with AllMusic about her history with the track, her various experiences at the Apollo Theater, and what music is giving her comfort as she retreats indoors with the rest of us. A recording of that night's show will be released on April 24 as Ella 100: Live at the Apollo! on Concord Jazz.

AllMusic: What is your history with "Cry Me a River"?

Cassandra Wilson: I must have heard that song when I was a child. The first version I heard was Julie London, and I also remember Joe Cocker's version, and it really twisted my mind, in a great way. He just tore the song up, he tore it apart. I always admired artists who could do that. I was a huge Joe Cocker fan.

AllMusic: Did that make it easier to give a take on the song that stepped away from Ella Fitzgerald's version?

Wilson: I think that feel is informed by the many versions that I've heard. I always loved the lyrics; aside from being very profound, they're very poetic. There are lots of lyrics that you hear that touch you on a certain level, they touch you beneath the surface, and that's one of those songs that has a very powerful and potent mix of great lyricism, great melody, and a very profound insight into the human condition.

AllMusic: The arrangement is a bit darker than her studio version. Did you have any input on that?

Wilson: Because it was a concert, it's Gregg Field's baby, and he did the arrangements for everything. You walk in and you know a cat like that is going to lay the table out correctly. So there's no need to worry. Really, there was no rehearsal other than the one we did the day before. We went over it a couple of times, and then we hit it.

AllMusic: Did hearing the other performers' versions give you energy to build on?

Wilson: Because the way it was scheduled, you really don't hear the performers until the night of. I did hear Patti [Austin], I heard her, and she just blew my mind. Of course, she's a totally different singer, and so I listen to her and appreciate her, and everything that happens in that kind of a situation becomes a gestalt, it becomes one piece, and you are involved in the moment and involved with the rest of the players.

AllMusic: Does performing at the Apollo ever become routine?

Wilson: Oh my god, the Apollo is special every time you go there, because there are so many layers and so many energies, so many spirits that are there. So every time you go, you get a different feeling, a different perspective on all of the musicians that played there. The people who run the place are very attentive to details and very respectful of the tradition.

AllMusic: Can you remember your first time performing there?

Wilson: My first time performing at the Apollo was with the Jazz Foundation. But I did go there to see Stevie Wonder do a live concert. It was in the early '90s, I can't remember what album he was doing at the time, but I remember being blown away. I think you come away from the Apollo like that sometimes, it just becomes a very spiritual experience, an otherworldly experience. I don't think you can take that out of it, unless you turn it into a McDonald's.

AllMusic: Does the building have any quirks you're particularly fond of?

Wilson: I can tell you what is not comforting, but that I kind of like, is the dressing rooms. The dressing rooms are the original dressing rooms, so you have to walk up several flights of stairs, maybe to the third or fourth floor, and it's very steep stairs, it's an old-fashioned theater. The dressing rooms are very small, and each floor has a window that opens, which is rare to find these days. It's amazing. It's a museum, but it's a living museum, which is exactly as it should be. There's still music being created there, and that's really important.

AllMusic: As you're sitting around at home, is there any specific music that's giving you comfort?

Wilson: There's so many. I'm listening to people now more than ever, because everyone's online right now. A lot of people are sharing music, and I'm listening to people like Monte Croft, who's a xylophonist who also plays guitar. The musicians who have an instrument are fascinating, the ones who are confident enough to perform, it's really interesting to listen to. Liam Ó Maonlaí from Hothouse Flowers has done some excellent live concerts from his home.

It's crazy, being able to listen to these people in their natural habitat, just playing music. It's really fabulous. It breaks down a lot of the barriers that we place around ourselves as artists; when we think of ourselves more as celebrities, we place these boundaries up, and when the boundaries are removed, who are you, and why are you doing this? Why do you make music? That's a good question to ask yourself every once in a while.