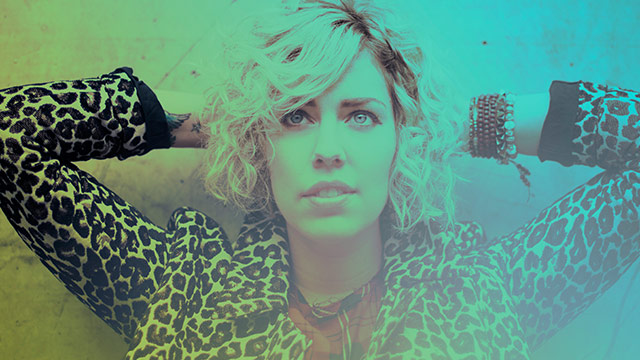 Singer-songwriter Jocelyn Alice blends elements of pop, soul and hip-hop in her music, epitomized by her single, "Jackpot." But before she blended all of those styles together, she learned to appreciate them individually, as shown in this playlist, curated by Alice exclusively for AllMusic. Press play on the widget and read along as she provides commentary, including her memory of hearing Chris Isaak for the first time, watching a hometown friend ascend to stardom, and why she thinks Justin Bieber is just now hitting his stride.

I personally really love some pop music just based on the fact that they have the best writers in the world writing for them .Like Ariana Grande, she’s not my favorite voice, but she has these monster writers, and it makes her music insane. Zayn is writing his own stuff now, but he came from a band that had these crazy writers. So a lot of times One Direction wasn’t my cup of tea, but the songs are so amazing that I’ll have it on my iPod and be studying those songs, figuring out how they did this. I wrote with a girl who wrote their song “Perfect,” and it was one of those life-changing experiences as a songwriter, to write with someone who writes every day for new artists and understands that hustle. I was surprised to like Zayn as much as I do. When we first heard it, we played it for 30 minutes straight, it’s so beautiful.

Reuben and the Dark - "Heart In Two"

They come from my hometown of Calgary, Alberta. They are signed to Arts & Crafts, which is the label of Broken Social Scene and Feist and some other really cool artists. I knew Reuben for a really long time, he used to work at the Market Collective booking bands for their monthly show, and I’d play that show, which was one of the first I really played as a solo artist. He really gave me a chance, and this was back when I was still figuring out my show, and I took over that job from him for a while.

I’ll never forget when he started taking off and he got signed, it was a really inspiring thing to know that he was from Calgary and doing it on a much larger scale. I’ve watched his career closely ever since, and I saw him in Vancouver opening for Vance Joy, and this one song really stuck out to me, which happened to be their new single, and it was one of those moments that was really special and I felt like I was part of something that would never happen again.

He did this song with Travi$ Scott, who I absolutely love, and I tend to not like the singles on albums as much as I like other songs, and that song was just so chill and the melody is insane and it’s so soulful and gritty, I have loved Justin Bieber’s voice since the moment I heard it, I think he’s so talented, and it’s very cool to finally see him making music that I listen to every day, I pretty much only listen to soulful, kind of R&B with hip-hop tinges here and there, so that was really exciting to finally feel like, “He’s doing the style of music I always heard him doing,” I thought his voice would lend to this style so well, and now it’s blowing up, it’s exciting.

I had a friend introduce me to them, and I really didn’t like it at first. I totally threw it away and said, “This isn’t for me,” and then I gave it another chance when I was living in Vancouver and doing a lot of walking and yoga, and that was an album that I could turn on and it felt easy. Their production is so subtle, and depending on which type of headphones or speakers you use, you’ll catch different things in the production, some headphones won’t pick up what they put in there. My music tends to not be subtle, it’s very obvious and loud, and I love living in other people’s words and wondering what it’s like to have that kind of brain, because I don’t think I ever will.

I had this boyfriend who was not very nice to me, and this was ages ago, it’s one of those “what were we doing together, we had nothing in common” relationships, but the one thing he brought to me was Chris Isaak, he introduced me to his music, and I’ll never forget hearing that song for the first time and thinking, “Oh my god, I’ll never hear another song like this one, this is such a special song,” and I added it to my live set on my Canadian tour.

People love that song, there’s voodoo in it, or magic, I feel like it’s one of those songs that maybe haunts him as a songwriter, because you’re never going to be able to one-up that song, there’s absolutely no way. I’d like to meet him and ask him about that. It’s a perfect song, and I don’t throw out that word often.

Lauryn Hill - "Everything is Everything"

I’ve loved that album for what feels like my entire life, it’s been in my life forever, it’s a staple, it’s like the Amy Winehouse album for me, it feels like it’s always been around. It was in those moments as a young teenager that I realized what I wanted to do and that I wanted to do something that was out of the norm, especially for where I come from, my province is known for country music, and growing up I was told that I’d be huge in the country scene, the way that I looked and the way I sounded, it made sense, but it didn’t make sense to me, that music didn’t speak to me in that way. I don’t think anyone will touch that album, it’s crazy.

I’ve admired Daft Punk for such a long time, they break so many rules in songwriting and production and in song forms. That song does not follow the original pop song form of verse, prechorus, chorus, they go all over the map and take me places where I’m not expecting to go, and what I really love about that song is the melodies all flow into each other, and I forget where I am in the song, which is a really hard thing for me to do, since I’m so immersed in songwriting. I can just be on the ride that they take me on, and everything they do is so sick.

That song was one of the easiest songs I’ve ever written, which I think is a huge indicator with songwriting, I think songs should be easy to write, and I think the good ones are. We were sitting in my living room, and the verse and prechorus and the beat all came simultaneously, and the lyrics, too, it all popped out right away. It was very exciting for us, because we knew we had something special, and the hook, I rewrote, because before it was this climbing hook that took a while to climax, and I knew that it needed to pop off right off the top. I was in my kitchen a few days later and I started singing it and was like, “That’s totally it.” I also tried to complicate it, I tried to expand on writing the hook that’s there now, and I said, “No, just repeat it twice, keep it simple,” and I’m glad I stuck with something that felt right.

For more on Jocelyn Alice, visit her site.