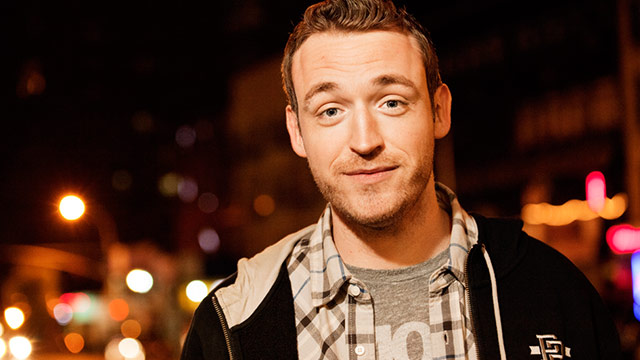 When we called up comedian Dan Soder to talk about his favorite Rolling Stones songs, he referred to them as "my second favorite band," which begged the question of who takes the top slot. He professed his undying love for high desert groove rock monarchs Queens of the Stone Age, so he threw the Stones list out the window and came up with a new list off the top of his head.

Soder first got into the band around the release of Songs for the Deaf while working overnights at a Tucson radio station and realizing that the album was the perfect soundtrack for a 30-minute drive through the desert at dawn. He's since seen the band live roughly a dozen times, and considers one of their songs to be his absolute favorite of all time.

His new special, Not Special, debuts Saturday, May 21, on Comedy Central. He also co-hosts "The Bonfire" on Comedy Central's Sirius/XM channel, has a recurring role on Showtime's Billions, and can be seen in the upcoming film Drunk Parents with Alec Baldwin and Salma Hayek.

“How to Handle a Rope”

Nick Oliveri is naked during this performance. You've been warned.

Dan Soder: There’s a real cool groove on that, it’s one of those song that when it starts, it just really starts, and I love that, it gets right into it. That’s what I love, I like that no-nonsense stoner rock. I saw them play the whole album at Terminal 5 in New York, it was fantastic, it was so good. They added the B-sides into the running order, which was really cool.

Soder: It’s from an album a lot of Queens fans look down on, but I think it’s awesome, which was Era Vulgaris. It grows on me the farther in time we go. I love the hook, the way it builds up, it’s very hip-shaking. He gets fuckin’ weird on it. I like that they’re unapologetically unique, I love that Josh Homme does what he wants and marches to his own drum, musically. I’d say he’s my favorite musician. Go back and listen to that album, it has a lot of really good songs that I think were overlooked. People liked the stripped-down versions that were on the Desert Sessions, but there are some good ones on there.

“God is on the Radio”

Soder: I think Songs for the Deaf is their most complete album. I love Lullabies to Paralyze, as well. "God is on the Radio" has the false endings live, like they do with “A Song for the Dead.” They love to do the false stop on that and “Better Living Through Chemistry.”

Soder: It’s kind of a ballad, in a weird way. When Nick [Oliveri, former bassist] does songs or when Mark Lanegan does songs, Josh got interviewed by Marc Maron and he asked him about how he doesn’t sing all of the songs, and Josh said, “I just want to make something great, I don’t care how small of a part I am of it, as long as I’m part of it,” and I think that’s such a great outlook to have, as someone who creates stuff. You have to be willing to put your ego in check for the betterment of what you’re creating.

I was bummed as a fan of the band when that partnership fell apart, but as a fan of Josh Homme, I got why he had to do that, it was to save the friendship, to save the band, to save himself, he had to cut out Nick, who was going through some shit. I was at the show at the Masonic Temple in Brooklyn when they did Like Clockwork after it came out, and Nick was there, watching the show, and they opened with “Millionaire,” and I was like, “Please let Nick get on the mic,” and he didn’t. I was a little bummed out, but I thought, “Here he goes…”

Soder: I think that’s such a great song, and my favorite rendition, the saddest rendition, there’s a great version with Natasha Schneider in Germany, they did MTV Europe Unplugged, and she’s on the keyboards, it’s a real breathtaking version, especially when you know that she passes away later, it’s really fucking good. I’m a big, big fan of “I Never Came.” That’s where he goes the whole falsetto, and it’s just so fucking good, you know that song was really written out of a place of real emotion. I’ve probably seen them live 12 times and I don’t remember seeing them do that one.

Soder: I feel like that’s the antithesis to “I Never Came,” which was this heartbroken love song, and then “Broken Box” is more like a heartbroken, “Hey, go fuck yourself” song. I think that’s a good song if you’re going through a breakup and you’re just like, “Get out of my life,” there’s that song.

Soder: I love that it’s kind of soupy and dreamy, and then it just goes into screeching guitars and it hits you mid-song, even when he’s talking about waving goodbye to the black balloons, “Wave bye-bye…” and then, bam, it kicks right in.

Like Clockwork was the first Queens album in five years, and holy shit, from the second I turned it on, I was like, “This album is a fucking monster.” Knowing that Josh had gone through that staph infection and all that stuff, and reading an interview where they were doing the self-titled album tour and he said he was trying to stimulate himself musically, creatively, and then to go through that and come out of it with Like Clockwork, I was like, “This is fucking great.”

I compare it to when you see a heavyweight boxer who’s a little older and they’re not just throwing a lot of flurries, they’re throwing very accurate, damaging punches, that’s how I look at where Queens of the Stone Age is now, they know what they do great, and they can change it up a little.

Soder: It was a song where I had self-titled, digested the album, loved it, and in a record store I found the Kyuss split record, it was when Queens of the Stone Age was still called Gamma Ray, and I heard “The Bronze” on it, and when they did the reissue of self-titled, it was on there. And it has that great chorus, I think it’s a really good song that was a great addition piece to what was already one of my favorite albums.

“The Vampyre of Time and Memory”

Soder: This is a song that was so big to me, and so amazing, and really shows the maturity we’re talking about. I thought it was such a vulnerable song. It was like, “Oh man, this is really good.”

If I were making their setlist, I’d put it in the middle of the set, kind of a wind-down, let’s catch our breath for a second, get emotional, and probably come back with something like “Do It Again,” I think that would be great coming out of a sad song, just that drum roll. I’d pair those two. Now that I’m saying it out loud, maybe I’d switch out “Vampyre of Time and Memory” for that. Let’s call that my eleventh song, honorable mention, “Do It Again.” It’s weird that I’m ending the list with two really slow songs, this one and my favorite song of all time, from any band, “In the Fade.”

Soder: When I saw them in Philadelphia and they lost their setlist, and they never play “In the Fade,” and Josh asked for requests and someone yelled out “In the Fade” and he was like, “OK, we’re going to do ‘In the Fade,’” and I was like, “Oh, that’s the fucking best!”

If they said, “What’s one song?” I’d say, “In the Fade.” The first time I heard it, I probably thought it was Josh singing, and then I listened and said, “Maybe I’m wrong,” and then it all clicked when I was listening one day in my car, I was like, “Is that the guy from Screaming Trees?” Then I thought it was even cooler that they would do that.