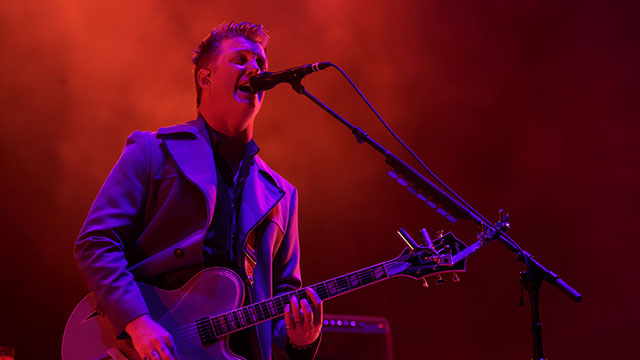 Hopefully the increasingly-exhausted Sasquatch audience got enough sleep Saturday night, because the fest's final day featured the most aggressive sets of the weekend, and guitars were king. One of the day's earliest sets was also its loudest, courtesy of former Distillers and Spinerette leader Brody Dalle, performing songs from her solo debut, Diploid Love, and a rollicking dash through the Misfits' "Hybrid Moments," which led to one of the weekend's rare mosh pits. She dedicated a song to her children, who were seated on the side of the stage, decked out with shooting range headphones, and looked every part the snarling, tattooed badass while slashing at her low-strung Telecaster. Diploid Love closer "Parties for Prostitutes" went out to the birthday girl in the audience, who may not have appreciated it as much if she read the lyrics, but musically it was the set's highlight.

In other birthday celebrations, Jess Wolfe of Lucius wished her co-vocalist Holly Laessig a happy birthday halfway through their energetic set, while over in the overflowing comedy tent—a theme for the weekend—Hannibal Buress tried out new material about porn star funerals and generational black wealth hundreds of years from now. If his theory is correct, it doesn't look good for Waka Flocka. Black clouds rolled in and dropped some sprinkles on the masses, who then received a thin layer of dirt on their bodies, cars and tents due to the wind that persisted all festival. Maybe the rain chased them off, but by the time Bob Mould finished his late afternoon set with a version of Hüsker Dü's "Makes No Sense At All," it was possible to easily stroll to the very front of the giant stage, which was otherwise packed the rest of the weekend. Crowd scarcity aside, Mould put on a show for the devoted few, and dropped in a few more songs from his previous bands than in a typical solo set. Meanwhile, Seattle-based synth-pop trio and relative newcomers the Flavr Blue played to an equivalent, if not larger audience on the fest's smallest stage, and the audience stuck around for the male streaker who climbed the scaffolding and swung through the rafters like monkey bars for quite a long while before getting dragged off, still naked, by security.

On the main stage, Haim played to a huge audience as the sun went down behind them and had the lawn dancing more energetically than we saw during almost any other set. Singer-songwriter Rodriguez crossed generational lines, as a field full of 20-somethings sang along to the 71-year-old's 1970 track "I Wonder" while a post-sunset chill started to fill the air. Kid Cudi took to the main stage with one of the more elaborately-designed sets of the weekend, striding out from a large tomb entrance prop onto a strip of red carpet to sing songs like "Mojo So Dope." Portugal. The Man gave many in the crowd an "Oh, that song is these guys" moment with "People Say," leading to a singalong that was audible from half a mile away, which was almost as loud as the frogs that made a racket every night in the pond at the festival's entrance.

Queens of the Stone Age closed out the main stage with the first two tracks from 2002's Songs for the Deaf, both interesting in that "You Think I Ain't Worth a Dollar, But I Feel Like a Millionaire" was typically screamed by long-departed bassist Nick Oliveri, and frontman Josh Homme's more melodic rendition robs it of some of its power, and "No One Knows" is the type of mega-hit usually reserved for the final sprint of a set. Homme spent the first few songs in a trench coat before switching to a more comfortable-looking cowboy-style shirt as the band dug into newer tracks like "My God is the Sun," complete with maracas and double-neck guitars. Recent addition Jon Theodore, best known for his stint as the drummer for the Mars Volta, more than capably followed in the footsteps of the departed Joey Castillo, playing with visible ease and fluidity while still making a tremendous racket. Multi-instrumentalist and longest running non-Homme member of QOTSA Troy Van Leeuwen deserves credit for his foresight—he left the wildly popular A Perfect Circle after the smash success of their debut to join the then-far-lesser-known Queens, and now he's performing on the Grammys and headlining festivals while getting to play lap steel on dirty boogie songs like "Burn the Witch."

If Tyler, the Creator thinks he was the king of ignorance at Sasquatch this year, then he's never heard "Feel Good Hit of the Summer," which is purely a list of illicit substances, and is delightfully, boneheadedly simple. But the raunchiness was counteracted by the band's sensitive side, especially the aching, piano-driven "...Like Clockwork," which showcases Homme balancing his falsetto and full voice approaches to vocals, and ends with enough of a lift that it could one day serve as a dramatic closer. Instead they closed with another pair of songs from Songs for the Deaf, the perfect in its brevity "Go With the Flow" and the call-and-response rave-up of "Song for the Dead."

If the crowd on the floor seemed a little less full than previous nights, it's because Major Lazer was closing out the fest on the other large stage, delighting the crowd with an elaborate visual presentation and winking inclusion of snippets from bands like Reel 2 Real, which had the security guards dancing at the exits. They worked their way back to the tent cities—due to its remote setting, hardly anyone stays off-site during the festival—dirty and tired, but hey, Monday was a holiday, too.

Sasquatch Saturday: The Middle of the Lineup Does the Heavy Lifting

Sasquatch Saturday: The Middle of the Lineup Does the Heavy Lifting