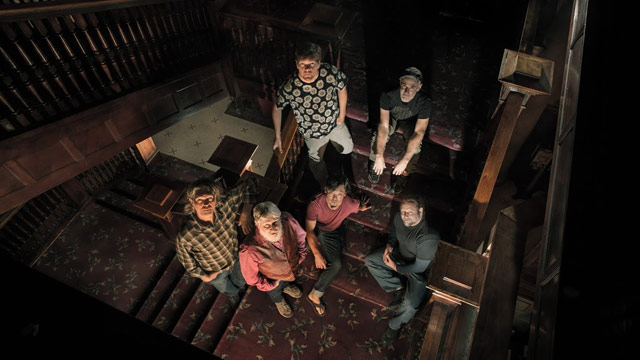 For their seventh album, the String Cheese Incident decided it was time to rethink their strategy when it came to whipping new music into shape. Instead of working out new ideas on the road before committing them to tape, the band rented a house in Sedona, Arizona, with the goal to write and record new music. They then collected the results and teamed up again with producer and former Talking Heads guitarist Jerry Harrison, and emerged with Believe, which arrives 20 years after the band's debut LP.

Bassist Keith Moseley talked with AllMusic about how the new approach sat with the band, how their second time working with Harrison was significantly different from the first, and if there are any musical ideas the band would automatically reject. Believe is out on April 14, and can be ordered via Pledge Music and iTunes.

AllMusic: What made you decide to record these songs before taking them on the road this time around?

Keith Moseley: Typically, we’re a band that debuts songs live and works them out over the course of playing them live on the road, but we had the idea, now that we have our new studio, that we wanted to take advantage of the studio process and try to groom these songs in the studio, the way that most artists would do, and get them distilled down to their best form before we debuted them. Having the luxury of our own studio now, I think that’s going to be the process going forward, to work things up and get them groomed and ready and recorded before playing them live, that’s kind of the goal now.

AllMusic: So when you begin with a recorded version of a song before taking it on the road, do you feel more obligated to stick to it?

Moseley: It’s been an interesting process, after getting the songs recorded, to go back and listen to the finished versions and actually learn how to play them live, to go back and revisit all the parts that are on the record, figure out who’s going to sing what, and recall how it went down and how to recreate it live. There’s some room to stretch in some of the tunes. For instance, “Get Tight,” one of my tunes, we’re finding that it makes sense to go twice through the solo section, and stretch the ending with some additional soloing and repeating the chorus over the ending, so that’s the natural process for how these songs adapt to the live situations. You find areas where you can stretch it and run with it a bit more.

AllMusic: What songs would you say have your particular stamp on this record?

Moseley: On “Get Tight,” I had a friend of mine, Tyler Grant, from a local band here called the Grant Farm, come in and play some Telecaster on it. It was something I’d conceived for that song as we were in the studio, I said, “I really hear it with this country guitar flavor, and I’d love to have someone come in and do some hot Tele licks.” We did it with our guitar player Bill’s blessing, to get some of that country twang in there, so I’m excited to hear what made the cut there, and that the song evolved the way I had conceptualize it.

AllMusic: Other musicians we've talked to who have recorded with Jerry Harrison noted his ability to tightly arrange their songs without losing what made them special. Is that similar to your experience with him?

Moseley: This was our second release we’ve done with Jerry, and he probably had more of an influential hand on the first one, in terms of really producing. On the previous record, once we got into preproduction, he had us change the key of a couple of songs to better highlight the vocalists, that sort of thing. On this record, he was influential in some of the arrangement ideas and some of the editing of the songs, but he had a bit more of a hands-off approach this time, as he was more accustomed to our style. I think we continue to evolve as songwriters, and are a little better at self-producing. So while he was very involved, it was maybe less dramatic this time than it was last time. I do agree that he was helpful in terms of arranging and editing ideas for some of the tunes.

AllMusic: Your band is noted for working in a wide range of styles. Is there anything you can think of that if someone brought it in, you'd have to say, "That's too far out there for us."

Moseley: We try not to say those words, the band has always been a highly-collaborative group of guys, with everyone contributing songwriting, everyone contributing singing, and the influences are extremely wide-ranging, so we’ve taught ourselves to just say “yes” to each other and try to honor each other’s ideas creatively, so sometimes someone will bring in a song that’s pretty much completed or finished, but even then we’ll try to create our own parts and see what works in that framework, so that everyone feels like they’re part of it and is more invested in the song. Even though Kyle or Billy may bring in a song that’s 90 percent complete, by the time it’s finished, it has our flavor stamped on it from everyone contributing. But the influences are super wide-ranging, and that’s a lot of what contributes to making us interesting, is that we keep you guessing with the songwriting and what you’re going to get.

AllMusic: So if someone is in a wild mood one day and brings in a song that sounds like Motorhead, you wouldn't automatically reject it.

Moseley: We just try to run with the ideas. A few songs have been brought in by various members that we try to give full attention to, but they just don’t seem to find their way into the setlist, even though we worked them up. At that point, there’s a little bit of a concession, like, “Hey, we spent time on it, but we can’t figure out where to put it in the set, it isn’t working.” We’ll try it a few times and it will fall out of favor, but we do try to give everyone’s ideas a fair shake and try to see if they can work in the live format.

AllMusic: The band has been playing shows for over 20 years; do you think you're an easy guy to be on the road with?

Moseley: I’ll tell you I’m the easiest of all. We’ve been the same group of guys for 20-plus years, so there’s definitely been growing pains along the way, but it’s a tight-knit family, and I think we’ve achieved a good balance of the amount of time we spend on the road. We’ve been doing 40-50 shows a year lately, and that affords a good balance of feeling like we’re out enough to sync up and get our groove on, but we’re still home with our families enough to have a nice balance there. We’ve learned to get along and how to work together, and it’s a continual process, like any other family, you have to continue to work at it. The music has been the reward, and everyone’s happy with where we are creatively, and I think we’re really on the forefront of the next creative wave, and we’re looking forward to all that’s going to bring.