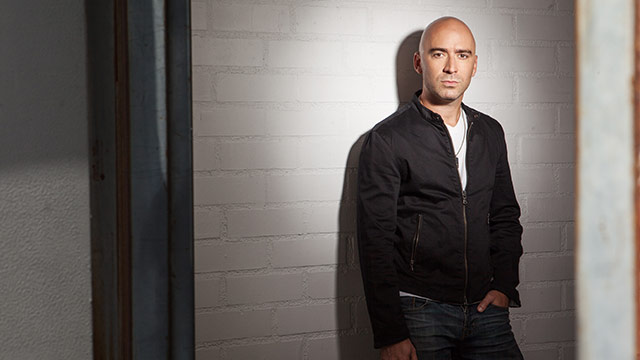 Though he departed the band more than five years ago, former Live frontman Ed Kowalczyk isn't shying away from looking back as that band's biggest album passes the 20-year milestone. Kowalczyk is currently on the road performing an acoustic version of Live's 8x platinum Throwing Copper, an exercise he says is rewarding for what it shows him about the tracks, how and why they connect with people in 2015, as well as connecting with the 22-year-old version of himself. We talked with Kowalczyk about how that album's producer, Jerry Harrison of the Talking Heads, shaped his songwriting, if "nostalgia" is a dirty word and how the songs translate into acoustic interpretations.

AllMusic: When someone brings up Throwing Copper, what do you flash back to?

Ed Kowalczyk: The thing that’s been foremost in my mind, especially over the last year as we’ve been celebrating the record, is just how fresh the material still feels to me. When I was thinking, “OK, I’m going to be singing all these songs again, every night, what’s that going to feel like, I haven’t done it before,” and some of them I hadn’t thought about or played that much since back then.

What really strikes me every night is how I’m still feeling it, and clearly the fans are, which is a blessing, but that when I sing a song like “T.B.D.” or “Stage,” I can go right back to where I was when I was writing it, and not only that, but this incredible new context for me, 20 years later. They’re still revealing things to me, little intuitions, little epiphanies. It’s a refreshing, amazing feeling, being that the work is over 20 years old, back to the actual writing process when I was 22, and I’m 44 now.

Kowalczyk: I think it’s more of a spiral than it is a linear progression, because there are things that you’ve learned, but things you have to unlearn to regain an innocence and a perspective that was more available to you in your early twenties. The more you could do your own thing in the early to mid 90s, the more you were congratulated, the more you were celebrated, and that’s a beautiful part of that time.

It reminded me of the current U2 tour, which I just saw, that tour is called the Innocence and Experience Tour, and I remember reading an interview where Bono was explaining that there’s that element where parts of your artistry and craft get more sophisticated, and that’s beautiful, but at the same time you have to unlearn some of that and make sure you don’t go too far in that direction, because there’s this really fine line of regaining that energy and innocence about the process and the craft itself.

AllMusic: You mentioned "Stage," which is one of the most aggressive songs on the record. How do those types of songs feel to sing now?

Kowalczyk: Back in those days, I remember it was more difficult for me to not write more aggressive songs; the ballads, the mid-tempo songs, those were more challenging. Now that seems to be a forte of what I’m doing now, which comes much more naturally.It’s interesting how we progress in that way. Between Mental Jewelry and Throwing Copper, that was the cliché of how you spend your whole life making your first album and you have six months to make your second one.

I remember having this blank slate after Mental Jewelry and going, “Man, what to do, what am I going to say, how’s it going to sound?” To get back to that and have that blank slate again is something that gets trickier the more success you get, the more freedom you have. Back then you had that all or nothing, “Let’s go,” kind of thing, and you try to regenerate that, but now you’re established and now you have fans who are waiting on pins and needles for your next thing, and you didn’t have that before. So it changes.

AllMusic: Several of the songs on Throwing Copper build to these noisy peaks, has that been tricky to pull off acoustically?

Kowalczyk: We don’t pare it down that much; as much as it’s unplugged, it gets pretty rockin’. My guitar player and I generate some production onstage, but if anything, it’s a more focused, sort of pointed kind of intensity with the acoustic performances. It’s definitely not less energy, and I know that because I’m feeling it and the fans are coming after the show and saying, “I was really expecting an acoustic thing where it was going to make things more pretty,” and it doesn’t go there.

It has moments where it does get really intimate, but it definitely is very visceral, tons of intensity, and more focused. We do a lot with dynamics and with the fact that my guitar player can do lap steel and mandolin and tons of stuff onstage. We’ve attacked the arrangements in a way that open up new colors and new moods in these songs that play to the songs’ vibe, but they’re different enough that they’re exciting in their own right, so it’s hard to explain. I feel like there are moments where I’ll walk offstage and say, “I feel like a whole band was rocking out, that was totally unleashed in this really cool way.”

AllMusic: Is there a lesson somewhere in here about "nostalgia" not being a dirty word?

Kowalczyk: I do. I’ve read people being critical of artists who do celebrations or anniversaries or whatever else, but from my perspective, and we’re not doing just the album the way it was, on these acoustic shows I’m really trying to do something different with it, and I think if you’re doing something that’s challenging you as an artist, and the music itself is still relevant to me and to the fans, in terms of what it’s speaking to them and what it’s speaking to me, and I think as long as that’s happening, the energy is in a good place. It’s been inspiring me for my next recording process, going into this space that we’re in now with these older songs, so it’s working.

AllMusic: Jerry Harrison from the Talking Heads produced the album, which was your second time working with him. How did that relationship develop?

Kowalczyk: I remember when the record company said, “Hey, this guy from Talking Heads, we’d like for him to produce the album,” I thought they meant David Byrne, that’s the only Talking Head I knew. So I did my research, and I was a Talking Heads fan, as a lot of people were in the eighties, and when I met Jerry, right away I realized this is a guy who’s been in a band for a really long time and understands band dynamics.

I’d say the biggest thing I’ve learned from Jerry that I’ve taken with me through my career is arranging songs. He’s really creative in terms of, “How many times do we do this part, let’s just do it twice here and sneak in another time here.” He’s really great at that. I wasn’t yet, I was still learning, all my songs were like eight minutes long. I didn’t understand why they needed to be five or four. Some of them can stay eight, but you can’t have that many of them, or we couldn’t at that time. Now it doesn’t matter, but we did have limitation of CD and album lengths back then, and cassettes couldn’t hold that much. So he taught me a lot there.

AllMusic: There are songs that I was listening to with 11-year-old ears, and they clearly meant something different to a kid than to an adult. How important is being able to bridge that gap?

Kowalczyk: That’s the mystery and the power of music, at some level it becomes this universal language, and you hear that thrown around a lot, but it’s true. I think what I’ve always gone into every project with as a lyricist, solo, Live, everything, is that lyrically, I’ve never said, “This happened to me and I’m going to write a song about it and this is exactly what I want it to mean.” That’s not really my game, I like to create these montages of meanings in a song, and I try not to be too vague and point at things that I’m feeling, but not necessarily specific. It’s a fine line, I want it to have meaning, but at the same time, I don’t want to limit it for people’s interpretation.

A song like “Lightning Crashes” is a perfect example, I’ve had so many versions of that song and what it meant to people, they come up to me and tell me, “This is what I got from it, this is what I was going through,” and most of the time it’s similar to what I meant, but it’s not exactly what I ever thought anyone would get, but it’s cool. It became a soundtrack to their story, and I’ve had that experience with many artists who have inspired me, from R.E.M. to U2. I get such a beautiful spiritual feeling from “Where the Streets Have No Name,” beyond lyric, beyond anything specific, there’s a real power in it.

AllMusic: "Lighting Crashes" has to be the biggest hit ever with the word "placenta" in it.

Kowalczyk: This is true, and probably the only one. I’m going to bet that we won’t see another one.

AllMusic: When you started the band you couldn't have imagined that it would end up being one of the hardest band names to Google.

Kowalczyk: It’s Google-proof, that was definitely not the most visionary brand in the early 90s, for sure. But I will say that Kowalczyk is much easier, even though it has its own difficulties. Thanks be to Google, all you have to do is Ed space K-O, and I’m usually neck and neck with former mayor of New York, Ed Koch, I’m one or two. I’m doing all right there, but “Live” is extraordinarily difficult.

AllMusic: Is there a style of music you love that you haven't explored in your own music?

Kowalczyk: I’m probably more into something like [Throwing Copper hidden track] “Horse” and alternative country, bands like Drivin' n' Cryin' and R.E.M. I’m probably a bigger fan of that kind of melody and production style than I’ve ever expressed in my own music, which is something I’d like to rectify, maybe on the next album with a song or two. I’ve been traveling down to Todos Santos, Mexico, for the last three years to hang out with Peter Buck of R.E.M., and I got my fill of incredible music that really inspires me, but is something I haven’t expressed that much in my own career. So the Athens, Georgia, college rock of the mid to late eighties, alternative country rock sound, I’d like to see myself do more of that.

AllMusic: Was there a band or song from back in that era that you thought should have been bigger?

Kowalczyk: There were bands that I felt that a lot of people knew about but never got super huge radio or anything. One was Guided By Voices, we covered one of their songs acoustically in the mid-nineties for a while, they had incredible melodies, incredible songs. That’s a band that I thought, “Wow, this is just insane, it’s so good,” and they have a huge following. I’d have been a shitty A&R man, the stuff that moves me usually has a big cult following but wouldn’t go to big commercial success that you’d need to keep that job. I’d have been fired.

Korn Guitarist James "Munky" Shaffer Looks Back on Their Debut and Early Day ...

Korn Guitarist James "Munky" Shaffer Looks Back on Their Debut and Early Day ...