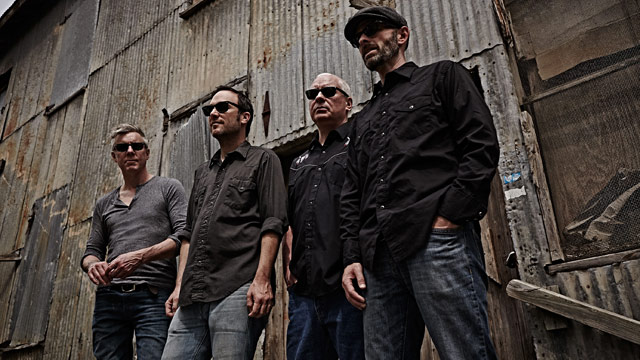 For many fans of 90s rock, the Texas-based band the Toadies were summed up by their biggest hit, "Possum Kingdom," from their 1994 album Rubberneck. Back in Texas, it was a different story, as nearly half of the songs from the album, including "Away," "Backslider," "I Come From the Water" and "Tyler," became regional staples and helped drive the album to platinum status.

After reuniting in 2006, the band harnessed that local love into an annual festival, Dia De Los Toadies, which just wrapped up its eighth incarnation. The band started giving stripped-down performances as part of the festival, which led to the creation of their new album, Heretics (out on September 18), which showcases stripped-down and rearranged versions of some of the band's old songs, plus a few new tracks and a cover of "Heart of Glass."

We called up Toadies frontman Vaden Todd Lewis to discuss his relationship with his older material, his formative musical experiences and what he learned from reworking songs that are as much as 25 years old. We also have the premiere of the new version of "Tyler" from Heretics, which eschews the original's guitar-heavy arrangement in favor of mandolin and keyboards.

AllMusic: How did the ideas for this specific reworking of "Tyler" come about?

Vaden Todd Lewis: Our festival took off immediately, so we decided to have a smaller, scaled-down crowd on the first night, kind of a campfire session, and the first year or two was pretty much straight-up acoustic guitar versions of the songs, which is fine, but we’d done that before, so we started thinking, “What else can we bring to this, how can we mess with these songs?” I remember something when I was first starting out as a musician that the mark of a good song is that you can play it on electric guitar or piano or violin or harmonica, and it’s recognizable as a good song. I thought, “That’s a high mark, why don’t I try that and see if these songs hold up?” It was kind of a scary endeavor. We went out in every direction and stretched our legs, and every year it got a little weirder and a little cooler and more dialed in, and last year we decided that we should go into the studio and do it in a controlled environment.

On "Tyler," I decided to not play guitar, but to play mandolin. I didn’t know how to play mandolin, so how about I go get a mandolin and learn how to play it? It’s fun, turning it upside down, and Clark [Vogeler, Toadies guitarist] said, “Keys would sound better, and since you’re not playing guitar, I don’t want to play guitar, I want to do keys.” So he jumped on keyboards and the whole arrangement upended itself.

AllMusic: The song was originally written about something very specific, is that still what's in your head when you play it or has it turned into something else?

Lewis: I’ve played these songs so many times, and the lyrics always mean what they mean to me. One thing that we all noticed on this record, the vocal track is usually the last one, you do a guide track early on and then lay the vocals on as one of the final elements, that’s what we’ve always done, and so once we started tracking vocals, everyone in the band remarked, “This has a different vibe, it’s darker and weirder than I remember it ever being,” and they’ve heard the songs as many times as I have. It really calls out the starkness of the arrangements, which puts emphasis on the vocals, which is cool. People have always come up with their own ideas of what the songs meant, which is why I bit my tongue for all those years until we decided to make that documentary and explain what they’re really about.

AllMusic: You were screaming a lot on the first record, is that something you still enjoy doing?

Lewis: That’s just part of being that age, I had something to say and that was the only way to say it. It’s funny, that stuff on that record, to me, is the easiest to sing, of our old catalog. It’s less high-end than a lot of the stuff up until this record. “Oh good, it’s a Rubberneck song, this will be a cakewalk.”

AllMusic: Your music really clicked with me when I was about 12 or 13. What music were you getting into at that age?

Lewis: I might have been 15 when I was just driving semi-legally, and I went to the record store and found somebody and said, “I don’t know what I want, but I’m tired of everything I’ve heard on the radio, and I know that I’ve heard of a band called the Talking Heads but I don’t know anything about them,” and she told me all about them and sold me a cassette, and it blew my mind, it was so different, so angular and weird and quirky and strange. A few years later, the Pixies came along with Come On Pilgrim, and that piggybacked onto the Talking Heads, so I feel those two bands stacked on top of ZZ Top were what made me tick.

AllMusic; Were you hearing ZZ Top from your parents?

Lewis: That’s just being from Texas, it comes out of every speaker, at least it did in the seventies and eighties. My parents brought me up on bluegrass and country, and country always clicked with me because of the storytelling and the swing and the groove that’s in there, old school country, and so those things have always stuck with me. I love telling a story and having a good groove to fall into.

AllMusic: Are you more of a pre- or post-Eliminator ZZ Top fan?

Lewis: Pre, very much so. “Asleep in the Desert” is one of my go-to chill songs, it’s just beautiful. I’d love to do a cover of that someday, that would be awesome.

AllMusic: When you think back on the Rubberneck era, what stands out the most?

Lewis: I think of an angry, short-sighted music snob. It was a weird time, I was trying to do music that emulates my heroes and I was sick of commercial radio and people trying to chase something and conforming their sound to what they thought would be marketable, it’s so clear to me when people do that. I never liked it, you’re just a cover band, like now everyone’s just knocking off Mumford & Sons. So it was like that with whatever hip band from 1989 when I started this band, so I just wanted to rail against it and do rock and roll that was fun and different and fucked up and strange, so we did that and somehow it clicked with people. That’s what I remember, is smelly, shitty clubs with one light bulb and a semi-working bathroom and warm beer out of a cooler with no ice.

AllMusic: Is it uncomfortable that such a strange time for you has been celebrated by a lot of people?

Lewis: It’s fine, I’m OK with it. The thing is, once we started to catch and once I saw, “Oh man, this isn’t just going to be a one-tour thing, this is multiple tours and multiple records and I’m doing this for a job now,” there’s a realization you get when you become a professional musician, and I realized, “I’m already less pissed-off than I was a year ago when I made that record, I’m not that guy, I don’t want to always be that guy, I don’t want to write ‘Possum Kingdom’ over and over again, I don’t want to have to fake being mad at everybody all the time.” It’s a time capsule of where I was at that moment, and every record pretty much is, and should be, I think.

AllMusic: If it makes you feel any better, as a kid I never thought the songs were all that angry.

Lewis: The further I get away from it, the more I can see, “I was very angry.” But that’s just who I was.

Heretics can be pre-ordered via Kirtland Records.