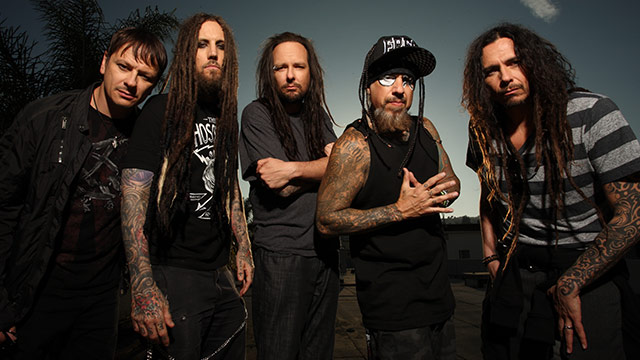 Last night, alt-metal pioneers Korn kicked off a month-long tour celebrating 20 years of their self-titled debut album. Led off by the band's defining song, "Blind," Korn used seven-string guitars, emotional outbursts and percussive slap-bass to lead the charge of what would become the defining hard rock sound for the remainder of the 90s.

James "Munky" Shaffer has been there since the beginning, as half of the band's dual-guitar attack. We got on the phone with Shaffer to reminisce about some of the band's earliest tours, how his old songs can still find ways to surprise him, and how the band reacted the first time frontman Jonathan Davis brought out his bagpipes, which would end up finding a home on the first album's "Shoots and Ladders."

AllMusic: Are you a nostalgic person?

James "Munky" Shaffer: I’m not really a nostalgic person by nature. But I’m the kind of guy that’s not looking to the future, because I’ve discovered that creates anxiety, when you start projecting what can be, so I think it’s a balance. When I reflect on the first album, there’s a sense of gratitude, a sense of accomplishment, and I look at the 20 years between that first record and now, and it feels a little longer. It’s gone by fast, but it feels like it’s been 25 years.

The songs, when you play them, there’s some elements that we didn’t know what we were doing, so there’s some beauty to that, especially because we weren’t writing for the radio. When your career moves step by step, you start to listen to management, you start to listen to record companies, you start caring about radio and commercial success a little bit more. Back then, we didn’t care, so that’s one of the things I love about that record. We weren’t writing for anybody but to satisfy ourselves creatively.

AllMusic: So it was a more innocent time.

Shaffer: Nobody was walking around like, “How am I going to pay my mortgage or feed my kids,” because we didn’t have that sort of responsibility. The responsibility we had was only to ourselves, and making a great record and having fun, so there was an element of innocence, even though we weren’t innocent.

AllMusic: On this tour you'll be playing some songs you haven't played regularly in a long time. Are any of them surprising you?

Shaffer: There’s a lot of songs I really love playing off of that, like on the song “Need To,” the way the bass guitar and the drums lock together and have this rhythmic sort of tribal thing going on, the guitars are doing something else, and then Jonathan comes in with the verse and it’s a great melody that goes over the top of it. Every time I play that I’m like, “This is so cool.” There’s a sense of pride, I’m really proud of that song. There’s the song “Clown,” the riff is so cool, I love playing it every night. And I sit and wonder, “How did we come up with this?” We were just trying to create cool riffs, that’s all we were worried about.

AllMusic: There weren't many bands that sounded like you at the time. What sort of strange tours did you end up on in the early days?

Shaffer: The first one that sticks out immediately is our first tour, which was us, Biohazard and House of Pain. I think the guys in House of Pain were looking at us and saying, “Wait, these guys are dressed like hip-hop kids, they’re from suburbia, they’re really angry, they don’t look like anybody,” I think they were like, “We get it, this is cool.” They could relate, because there they were, three white dudes in a hip-hop world, I think that’s why it resonated with them, and that’s why they gave us a break.

Shaffer: I like doing it, especially when I’m in key, which is rare, but that’s when I enjoy it. When I can’t hear myself, it can ruin my show. I try to do the best I can. I’m not a singer by any means. A lot of the stuff Jonathan does in the studio, it’s not easy, so trying to sing his background vocals live, it’s almost impossible to do, because some of it’s high, some of it’s growling, and some of the stuff that Brian ["Head" Welch, guitarist] used to do in the days before he left, I started to do them when he left, so I have to be honest, it’s a struggle for me every night, but I do it. It’s something that if I do it and I do it right, I give myself a pat on the back. If I do it and I screw it up, I’m mad but it goes away.

AllMusic: This is a record that some people have loved for over 20 years. What's some music that's stuck with you that long?

AllMusic: If you get a chance to take a breath and look back on the career you've manged to have, it has to be pretty rewarding.

Shaffer: I have such a sense of pride about what we’ve accomplished. I always feel like our next record is going to cement our legacy. And the idea that the term nu-metal was created to describe this band, Korn, I’ll accept it. Then you had a lot of bands that sound like Korn but you don’t hear them say, “Oh, Korn influenced me.”

A lot of fans will say that, or things like, “I play guitar because of you,” but bands are reluctant to stay that we influenced them, but you can hear it in their sound. I don’t know at what point people, our colleagues, are going to start to recognize that. We play festivals, and on each side of the stage, you have people from all the bands, they’re all watching. But then you don’t hear them in the press saying that Korn influenced them, it’s crazy.

AllMusic: You were always quick to cite your influences; a lot of people heard about Mr. Bungle for the first time from you guys.

Shaffer: Oh my god, I love Mr. Bungle. That’s another record I love. I love all of them, I love that band. I hope one day they get back together to do a tour. I love the first one. They did a cover of Billy Squier’s “The Stroke,” I had that, a bootleg on VHS from some show, I loved that. They did it really slow, like heroin slow. We’re still big music fans, we love finding something new and inspiring. With every artist, especially with this band, it gives us new opportunities to create something new with the same ingredients, just slightly different.

AllMusic: What was the first reaction when Jon got out the bagpipes?

Shaffer: It was a little like, “How is this going to fit in?” and then it was like, “OK, AC/DC did it, that was cool, so why not, let’s try it.” That’s one thing, everybody is always willing to try new ideas, we’re always really accepting of whatever creative path somebody wants to experiment with, and we adapt to each other’s likes and dislikes, I think that’s why we’ve been so successful for so many years.

Shaffer: Yeah, let him exorcise it. There’s always going to be the next record, we can try different things, there’s other songs. I think we can conglomerate a lot of creative ideas into one song, and that’s why people resonate with and like it, it’s so different and it reflects each of our personalities, it comes out through our instruments and our creative outlets.

AllMusic: Was there an exact moment when it really felt like the band was taking off?

Shaffer: It was really early, I just remember one moment where we were on tour with Marilyn Manson and Danzig, we were opening up, so we had like 30 minutes at 7:30, the beginning of each night, to go up and do the best we could. I think it was about three weeks after the release of the first album, we were on that tour, and someone from the record company came and said, “Guess what, you sold 800 copies of your album,” and we were so happy, we thought, “People get it.” To us, that was success, we’d made it to the top. That week, 800 individual people went to the record store, bought our record, took it home, unwrapped it, put it in their CD player, that times 800, and that was success to me, that was a great moment, to hear that news.

AllMusic: So if you were just James washing cars in Bakersfield now, you'd still be telling people that story.

Shaffer: Yeah, and I’m telling you now! It was the greatest news that anyone could have given me. If 800 people like that and they go tell one of their friends, we could potentially sell 800 more next week.

AllMusic: I watched some of your set at Rock in Rio this year, and a lot of the audience members seemed very affected by the performance. They aren't afraid to shed some tears.

Shaffer: I have a lot of fans approach me at every show and tell me, tell Jonathan, in tears, a lot of times, how the band saved their lives, how we helped them get through things, and it’s mutual. We’ve gotten to do what we loved because we’ve been through those hard times, too, we just have had the luck and the talent to express it, and our fans have been so loyal, and we’re so grateful to them. It’s rare, man, to have an audience connect with your music on that deep of a level, I’m really grateful for it.