After a three-year break that included solo projects and soundtrack work, Korn's re-emergence in the summer of 2002 was met with great anticipation. They delivered Untouchables, an album that shows them building on their previous sound and emphasizing its strengths. The use of melody is more important than ever, allowing Jonathan Davis to utilize his wide palette of vocal tricks. His charismatic voice can now move from a clear-throated wail to a death metal growl with ease, lending the album a manic side that brings to mind King for a Day, Fool for a Lifetime-era Faith No More. The only problem with Davis is his lyrics, which tend to fall into the "am I going crazy" trap that many of Korn's contemporaries perpetuate. This is a shame, because here he often avoids the social issues that he confronted on the first few releases. The band is far more experimental this time out, delivering Helmet-like ringing guitars that melt and morph into each other, a mix of Metallica-esque blastbeats and tight funk drumming from the constantly improving David Silveria, and memorable riffs that take the shape of dark sound structures and offer more than just a collection of chords. In fact, it is the last point where the album sets itself apart from most nu-metal offerings; Korn understand that the overall sound of hip-hop works because of the sonic stew that producers create through samples. The band does the same with instruments, cutting the chugging riffs of the past and replacing them with edgy soundscapes that are equally as menacing. There isn't even a rapped verse here, save for Davis' rhythmic scatting at moments, further distancing the band from the scene it helped create. But by cutting away some of the fat and finding new ways to deliver their trademark roar, Korn manage to offer a strong and lean album that maintains their place as innovators in a genre with few leaders. 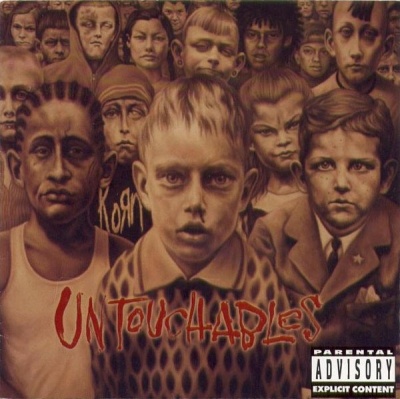