Take a Look in the Mirror Review

Just short of a decade into their incredibly successful and influential career, Korn went into Take a Look in the Mirror publicly stating their hopes to record a fresh-sounding album, a seemingly simple task that they somewhat ended up accomplishing. They needed a fresh album -- one that differed from their past couple, the similar-sounding Issues (1999) and Untouchables (2001), yet at the same time wouldn't alienate their notoriously fickle nu-metal fan base. Issues and Untouchables had been fine albums, but Korn definitely needed a change -- if they wanted to remain relevant, that is. There's a lot of turnover in the metal world because there's always the next big thing (whether it's thrash, grindcore, alt-metal, rap-metal, or whatever), and the rare bands that do last (like, say, Tool) do so because they keep changing and therefore retain the curiousity of their perpetually aging (and thus perpetually dwindling) fan base while at the same time drawing in new generations of listeners. It's a tricky business, really -- you need to keep changing yet still maintain your essence. And Korn does that very well on Take a Look in the Mirror, where they deftly consolidate their past strengths and self-produce a succinct album that sounds like trademark Korn -- yet purposefully doesn't sound like any Korn album to date. It's a little paradoxical, but that's precisely what makes Take a Look in the Mirror so interesting, especially for longtime fans. Particular songs draw from past Korn albums -- whether it's the ultramelodic Issues/Untouchables style of "Alive," the overt rap-metal Follow the Leader style of "Play Me," the covert rap-metal Life Is Peachy style of "Y'all Want a Single," or the seeing-red berserk Korn style of "Break Some Off" -- while a few highlights ("Right Now," "Counting on Me," "Did My Time") break into exciting new territory. And perhaps most importantly, Korn keeps Take a Look in the Mirror brief: a baker's dozen in 45 minutes if you don't count the hidden bonus track (their ADD-paced live version of "One" from MTV's Metallica comeback special). Because of the emphasis on brevity and variety (and especially quality), the album's over before you know it and you're left feeling hungry for more Korn. 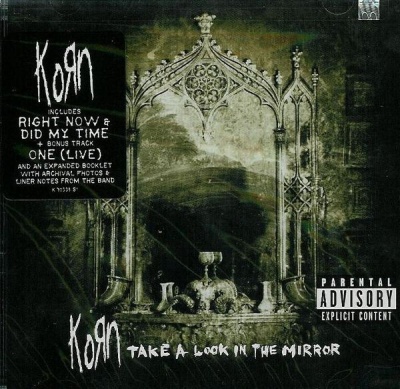 Take a Look in the Mirror Album Information