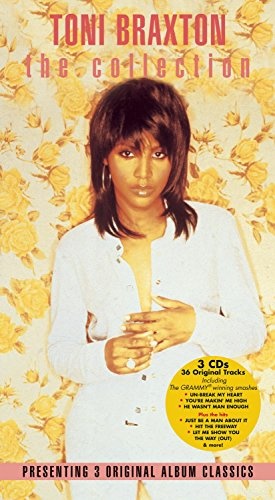 Released in 2006, The Collection bundles 1996's Secrets, 2000's The Heat, and 2002's More Than a Woman -- Toni Braxton's second through fourth albums. Unlike some three-in-one packs that skimp on the liner notes and artwork, this one contains the three discs as they were originally released, and they're in individual cases, so the flimsy paper sleeve that wraps around the whole thing is obsolete. This is a cheap way to obtain three of Braxton's most popular albums. They include several hit singles, including "Un-Break My Heart," "You're Makin' Me High," "I Don't Want To," "He Wasn't Man Enough," "Spanish Guitar," and "Hit the Freeway."