Thanks for the Memory: The Great American Songbook, Vol. 4 Review

Fourth album, same as the first. Ever since he successfully reinvented himself as a lazy lounge singer in 2002 with It Had to Be You: The Great American Songbook, Rod Stewart has been reliable as clockwork, releasing a collection of classic pop standards -- predictable choices performed predictably -- every second or third week of October. Four albums in, producers may have come and gone -- Phil Ramone left last time, Richard Perry is no longer around, leaving producer Steve Tyrell and arranger Bob Mann as the men in charge (of course, Clive Davis, the mastermind behind this whole shebang, is still around) -- but it's nearly impossible to tell the differences between Thanks for the Memory: The Great American Songbook, Vol. 4 and the first or either that came between. Sure, there is an ever-increasing number of duets on the records -- the first had none, the second had two, the third had four, and this has seven, including instrumental appearances by George Benson and Chris Botti -- but the arrangements never are risky and always sound better suited for background music in a cocktail bar than on record. Needless to say, it makes for rather boring listening and Stewart is starting to seem a little restless too, interjecting more "baby"s and "oh, Diana"s to his duet with Diana Ross on "I've Got a Crush on You" than necessary. He didn't do that kind of ad lib on the first three albums, and he sounds a lot more casual overall on this fourth volume than he has before, but these are very minor differences: this remains the same sleepy, faux-classy music as before. Rod's voice is still not suited for these songs and the songs aren't arranged imaginatively; they're arranged to remind the listener of other, better versions of the same tunes. So, they're not great records, either by the yardstick of Rod Stewart's own work -- and, don't forget, he's made more than his fair share of great records -- or by the standard of traditional pop. But they are successful, since they appeal to listeners raised on rock yet who are nostalgic for their parents' music, without wanting to hear the original recorded versions. So, bully for Rod the Mod -- he's found a way to have a successful career as a veteran without embarrassing himself as he did on Human. But for fans who not only cherish his '70s work, but stuck by him through the patchy '80s and could find worthwhile moments on such latter-day albums as When We Were the New Boys, these Great American Songbooks are not just tiresome, but rather depressing. And, in that light, Rod's promise in the liner notes of "just think, this is only Volume IV" reads a bit like a threat. 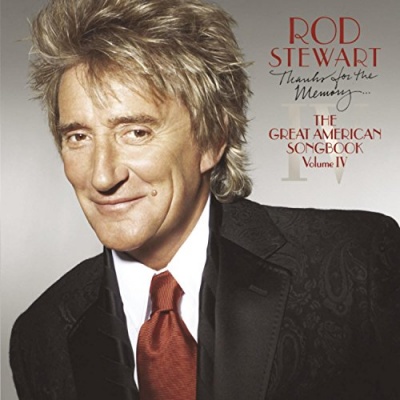 Thanks for the Memory: The Great American Songbook, Vol. 4 Album Information