Fly Me to the Moon: The Great American Songbook, Vol. 5 Review

Rod Stewart has been mining the Great American Songbook for the better part of a decade, so it would only make sense that he would get a little bit better as time goes by. And, by some stroke of fate, Fly Me to the Moon -- the fifth installment in this never-ending series and first since 2005, as Rod spent the back half of the 2000s taking songbook detours into rock and soul -- is Stewart’s best album in the entire series. Some credit must be due to producer Richard Perry, who returns to the project after a few records off, but what distinguishes Fly Me to the Moon isn’t precision but relaxation. Rod is cool and loose, comfortable with the contours of these standards, which he should be after singing them for ten years. Standards still may not be suited for Stewart’s particular gifts -- unlike the rock and R&B numbers of his early years, he has absolutely no interest in rearranging the tunes or doing something unexpected with them, so he simply wraps his soulful rasp around them, sometimes sounding too ragged for the surroundings -- but he knows how to make his flaws work in his favor. He sounds like he’s having fun swinging through the tunes everybody knows by heart, and that’s the difference on an album that’s otherwise interchangeable with what came before: usually, the Great American Songbooks sound obligatory, but here there’s enough spirit coming from Rod to make this the best album in the series. 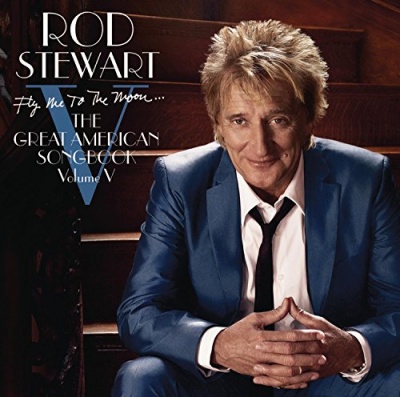 Fly Me to the Moon: The Great American Songbook, Vol. 5 Album Information