This nine-CD box was a lot more attractive when it first showed up in 1999, before Sony Music introduced its Direct Stream Digital mastering and super-audio CDs -- it's not quite the state-of-the-art reissue that it seemed then, as the state-of-the-art has been advancing ever-faster, but it's still an alluring package. The concept behind the Original Jacket Collection is to put together a coherent body of work by a performing artist -- the core of his/her repertory, as in the case of the George Szell set, built around his Beethoven symphonic and orchestral recordings, or the Bruno Walter box, centering on his Mahler and Bruckner recordings. Sometimes they're a little broader than that, as with the Leonard Bernstein box, which centers on the rather widely dispersed highlights of his repertory, from Haydn to Ives; the resulting CDs, re-creating the programming of the classic LPs concerned, are packaged in mini-LP sleeves, re-creating the original artwork in miniature, as well. The packaging and the whole concept behind it originated in Japan, where Sony Music (on Miles Davis, Al Kooper, et al.), BMG (on everyone from Toscanini to Elvis Presley), and other labels have been releasing audiophile-quality remasterings -- usually either 20-bit K2 or 24-bit -- of classic LPs in mini-LP sleeves, since the mid-'90s. In the case of the domestic Sony Original Jacket Collection series, there's not as much consistency -- some boxes, such as the Szell/Beethoven set, have recordings that have been upgraded from their prior CD editions, while others, such as this set, offer music that isn't otherwise available on CD.

In Stravinsky's case, the boundaries for a representative box are a little tougher to define, as it was his work as a composer across a half century that defined his primary importance and provided the raison d'etre for his work as a conductor and recording artist in the first place -- born in 1882, he was the first composer of major international stature to live well into the era of recordings, and to develop the determination (partly fueled by the financial rewards to be realized therein, and aided and encouraged after the 1940s by Columbia Masterworks label chief Goddard Lieberson) to leave behind his own interpretations of his most important works; and because he remained active through the 1960s, into his ninth decade, a large body of those recordings exist in a fully technically viable state (done almost exclusively for Columbia Records across four decades). Indeed, he recorded over such an extended period that in many instances he left behind two or more recordings of his most important works that could rightfully have been considered authoritative at various times, some decades apart. Stravinsky's recording history was complicated by the reality of his initially minimal training as a conductor; over the decades, he got better as he amassed experience leading hundreds of performances of his most important works in concert, but unlike his half-generation-older contemporary Richard Strauss -- who was a virtuoso conductor and, indeed, preferred to conduct the works by composers other than himself -- Stravinsky's worth at the podium was confined to his ability to shape performances of his own music, and even within that definition it was a highly nuanced and narrowly focused ability. Complicating his recording history even further was Stravinsky's practice of periodically revising his works in a quest to preserve their copyrights and maintain the stream of royalties generated from their performance and recording. With one exception -- the "bonus" ninth disc -- the music here is confined to Stravinsky's last cycle of interpretations of the pieces involved, all in stereo and dating from the very late '50s through the early '70s. Those recordings were done with the assistance of conductor Robert Craft, whose unique collaborative relationship with the composer over the final two decades of his life brought to his recorded work a level of polish and consistency that had been achieved only part of the time in Stravinsky's prior studio efforts. These were the versions of the pieces that the composer, then in his seventies and eighties, understood as his likely last thoughts on them in terms of how they were represented, and he intended to stand in perpetuity. That said, they're not necessarily the final word on performance of the music at hand, because there are obviously, at any given moment, dozens of virtuoso orchestras and insightful conductors with ideas and approaches of their own to be heard that are valid as interpretation. However, the work here is a realization of how the creator himself, in his later life, visualized the works and interpreted his own scores, and set them down for us to hear. And if they're not the place to stop, they're certainly the place to start listening. 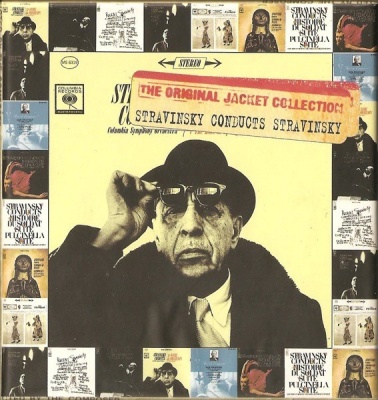