Igor Stravinsky recorded his The Soldier's Tale Suite three times -- first in 1932, then again 1954, and finally in 1961. He seems, however, to have recorded the complete work not at all. He did record the four additional minutes of music necessary to produce a complete performance in early 1967 -- but no recording of a complete performance was ever released. This 2006 Sony release of the complete Soldier's Tale with the composer leading the Columbia Chamber Ensemble is in fact a complete performance: an expanded version of the 1961 recording plus the extra four minutes and a dubbed in Jeremy Irons serving as the narrator. Featuring the expert work of violinist Israel Baker, trumpeter Charles Brady, and percussionist William Kraft along with four other ace L.A. players and recorded by producer John McClure in bright, clean sound in Columbia's Hollywood studios, Stravinsky's 1961 recording of the suite was arguably his most technically secure and interpretively persuasive, and this release cunningly edits and arranges it into a seamless performance. Irons is arch, articulate, and very affecting as the narrator, and anyone looking for a recording of the complete work need not hesitate. The coupling of the Symphonies of Wind Instruments and Stravinsky's Tombeau de Claude Debussy, performed by the Columbia Symphony Winds & Brass led by Stravinsky's amanuensis Robert Craft and first released in 1974, is superbly performed and likewise deeply moving. 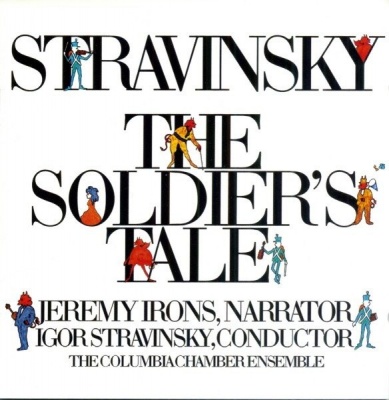