This release really is the "essential" Stravinsky in the sense that every major piece of his entire oeuvre is represented here and in chronological order. You get a picture of his compositional style and how it changed over the course of his career. It ends with a bonus track, an animated recollection by Stravinsky of the writing and premiere of Le Sacre du printemps. That incident seems to be the one thing that everyone knows and remembers about Stravinsky and his music. But that was relatively early in his career. Once you get past the first half of the first disc, with all the familiar themes from Le Sacre, The Firebird, and Petrushka, you get into his neo-Classical works and then his much-less-known, serial-influenced works of the 1950s and '60s. The little surprises among the later works are an orchestration of a Gesualdo madrigal; the brief, profound Elegy for J.F.K.; the somewhat spiky, yet still stately Fanfare for a New Theater; and a clever setting of The Owl and the Pussycat. Most of the excerpts are performed by the Columbia Symphony Orchestra or other Columbia ensembles, conducted either by Stravinsky himself or by Robert Craft, his assistant in the last 20 years of his life, so they could be called definitive interpretations. There are also a few performances conducted by Esa-Pekka Salonen and Michael Tilson Thomas. All in all, this set is a great way to go beyond Le Sacre and get to know Stravinsky and his music better. 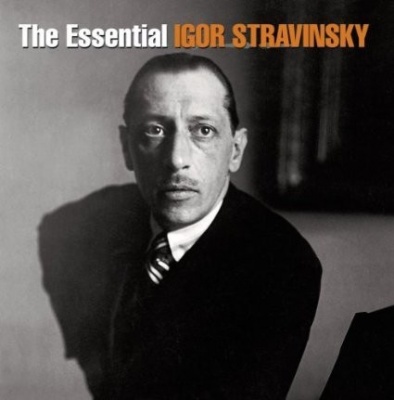