Spitfire was Jefferson Starship's 1976 follow-up to the chart-topping Red Octopus (1975), and it found the band in a cooperative mood. All seven bandmembers earned writing credits on at least one of the nine songs, along with eight outsiders, and even drummer John Barbata got a lead vocal on the simple rock & roll song "Big City." But the three main power centers in the group remained in place. Singer/guitarist Paul Kantner continued to turn out his lengthy, complex songs with their exhortatory, vaguely political lyrics (the five-minute "Dance with the Dragon" and the seven-minute "Song to the Sun: Ozymandias/Don't Let It Rain"). Singer Grace Slick contributed her own idiosyncratic compositions, simultaneously elliptical and passionately stated ("Hot Water" and "Switchblade"). And singer Marty Balin, whose romantic ballad "Miracles" had fueled the success of Red Octopus, wrote (or located) and sang more songs of love and pleasure ("Cruisin'," "St. Charles," "With Your Love," and "Love Lovely Love"). Weaving the three styles together were the fluid lead guitar work of Craig Chaquico and the alternating bass and keyboard playing of David Freiberg and Pete Sears. The result was an album that quickly scaled the charts, spending six consecutive weeks at number three in Billboard and going platinum. That it didn't do better on the band's considerable career momentum can be put down to the relatively disappointing nature of the material. There was no "Miracles" on the album, to begin with. Grunt Records released the more modest "With Your Love" as a single and got it into the Top 20, but the closest thing to "Miracles" was really "St. Charles," a song that certainly had some of the same elements but lacked the kind of direct emotional statement that made "Miracles" a classic. Similarly, "Dance with the Dragon" was no "Ride the Tiger" (from Dragon Fly [1974]), and while "Switchblade" was an unusually clear statement of romantic intent from Slick (whose "lyrical wordplay is...not easily accessible yet compelling and thought-provoking," as 2004 reissue annotator Jeff Tamarkin generously says of "Hot Water"), its provocative title made it an unlikely choice for an adult contemporary hit. Spitfire was more than the sum of its parts, boasting the sort of vocal interplay and instrumental virtuosity that had always been the hallmarks of Jefferson Airplane and Jefferson Starship. If the band had taken more time to write and find better songs, it might have matched the sales and quality of its predecessor. 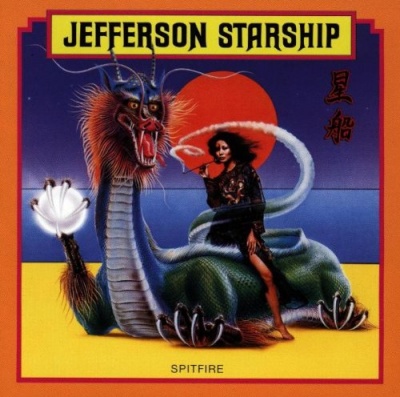