Blows Against the Empire Review

Paul Kantner's debut solo album actually was credited to "Paul Kantner/Jefferson Starship," the first use of the "Starship" billing, predating the formation of the group with that name by four years. Kantner used it, extrapolating on the name of his current band, Jefferson Airplane, to refer to Blows's science fiction concept: A bunch of left-wing hippies closely resembling his San Francisco Bay Area compatriots hijack a government-built starship and head off to re-start the human race on another planet. Kantner had presaged this post-apocalyptic colonization idea on "Wooden Ships" on the last Airplane album, Volunteers, and here he expanded it out to album length with the help of members of The Airplane, the Grateful Dead, Quicksilver Messenger Service, and Crosby, Stills and Nash, plus assorted others, a shifting supergroup informally known as PERRO, The Planet Earth Rock And Roll Orchestra. (Kantner later would borrow that name for a subsequent solo album.) Blows actually was a little loose as concept albums go, seeming as concerned with the arrival of Kantner and Grace Slick's baby as with the departure of the starship. Kantner employed often dense instrumentation and complex arrangements, but there were enough hooks and harmonies to keep things interesting. Blows eventually went gold, and it was even nominated for a science fiction award usually reserved for novels. 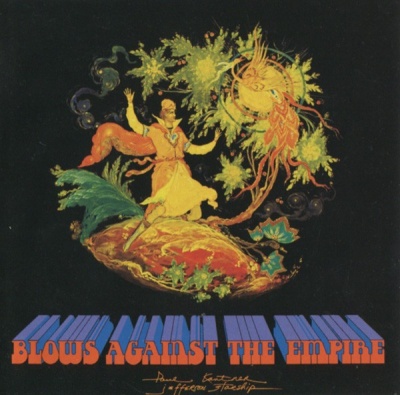 Blows Against the Empire Album Information