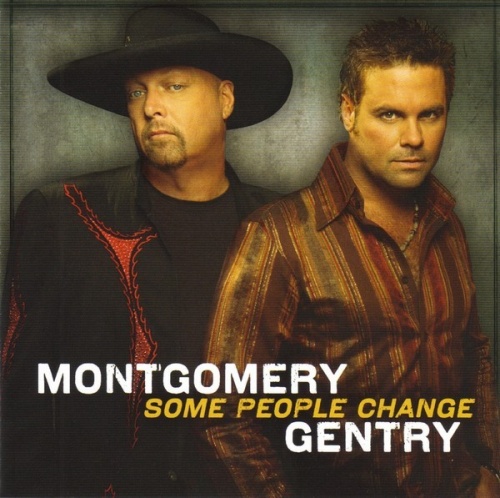 Since the release of Tattoos & Scars in 1999, Eddie Montgomery and Troy Gentry have been making consistently fine country-rock records and videos (the latter thanks in large part to the wonderful director Trey Fanjoy). While their albums translate to CMT and GAC -- and of course to the Billboard charts -- the duo has never been comfortable making one kind of recording. They dig deep with their producers -- in this case Mark Wright is primary -- to find the best songs and let them rip. Guitars roar, wail, and whisper, and Montgomery Gentry's wonderfully contrasting voices and passionate, down-home delivery tie them to the great traditions of both rock and country. They've consistently sent out a message of tolerance -- but they demanded to be tolerated as well. (Do we ever need that message in a nation as deeply divided as the United States in 2006.) Each successive album has been a hit, and deservedly so. Some People Change, however, is a step above.

These two fellas have a way with a song. Kenny Chesney was the first to record the wonderful "Some People Change" by Michael Dulaney/Jason Sellers/Neil Thrasher. Given that it's a great song, nobody could do a bad job with it, and Chesney's was better than decent. But it simply turns to gray in lieu of the treatment given it by Montgomery Gentry, with a blend of acoustic and electric guitars that wind together before Montgomery's deep baritone lays out the contrast in the lyric: "His ole man was a rebel yeller/Bad boy to the bone, he'd say/Can't trust that feller/He'd judge 'em by the tone/Of their skin...." A wah-wah peddle floats atmospherically and a synth slips in gently and Montgomery continues: "He was raised to think like his dad/Narrow mind, fulla hate/On the road to nowhere fast/Until the grace of God got in the way/And he saw the light and hit his knees and cried and said a prayer/Rose up a brand new man and left the old one right there...." The guitars build to an almost unbearable tension and finally break with a B-3 announcing Gentry's arrival on the refrain, which is an anthem: "Here's to the strong/Thanks to the brave/Don't give up hope/Some people change/Against all odds/Against the grain/Love finds a way/Some people change...." Simply put, the song addresses race, class, religion, and (later) addiction, as well as hope, tolerance, and the willingness to believe redemption is possible in any situation. When was the last time a country recording addressed topics like this in a single tune that opened an album? When a gospel choir enters near the end to join the pair on the refrain with soloing guitars and tight, clipped drums, it becomes transcendent. It's one of those tunes that defines something that lies at the heart of what is good about Americans.

True to form, however, Montgomery Gentry aren't about to have their music co-opted by anybody -- left or right -- and the very next cut, "Hey Country," quotes from Lynyrd Skynyrd, Hank Jr., Marshall Tucker, funk, and hip-hop, and is a true redneck rabble-rouser. Killer metal guitars, banjos, funky basslines, and chanted choruses all war with each other and finally come to an equal level to make this the best tune that's never been on rock & roll radio. "Lucky Man" is a pure country song, and it updates "I Ain't Got It All That Bad" from You Do Your Thing. Its protagonist -- Montgomery in this case -- is older, wiser, and even more grateful. Here again, it's a message tune, but one that is poignant no matter what color collar you wear, whether or not you support the President of the United States, and whatever religion you choose -- including none at all. The steel guitar whines ring above the impeccably recorded vocals while the electric guitars and tom-toms pop and jump to underscore the lyric.

That's how the album goes, without a filler cut in the bunch. Other notables include a woolly country-rocker "It Takes All Kinds" -- it would be a great second single -- that also celebrates American difference. These guys know how to use a B-3, electric guitars, and drums as a basic function of carrying song lyrics, not as merely accompaniment. There are broken love songs ("Your Tears Are Comin'") and faithful ones ("If You Wanna Keep an Angel," a rock & roll country song with an amazing chorus of backing vocalists). There are paeans to lost fathers from stubborn -- and newly wizened -- sons ("20 Years Ago"), and a gorgeous ballad written by Montgomery called "Clouds." A piano carries his voice, cracking, breaking, and utterly sincere in its sadness and tenderness. When synths shimmer in the background, they don't intrude, just color. This is an elegy that, one more time, offers a portrait of the sheer diversity and range of this band's ability to deliver songs with conviction, sass, grit, and softness whenever necessary.

Some People Change is one of the many things that's right with mainstream country music in the new millennium. It's brave and it looks for commonality, not to define people but to celebrate them. Its tone is balanced and even and wild and raucous, all at the same time. Country taught rock & roll plenty in the past and there is no doubt that rock & roll is influencing modern country presently -- and this album is a showcase of that. Both are the better for it. Some People Change is a new pinnacle for the duo. It feels like it was conceived as an album, not merely as a collection of songs or singles, and to the credit of Montgomery Gentry, they execute it like one. It's a masterpiece; listeners need more records that aspire to this kind of excellence.