Back When I Knew It All Review

Since they busted into the big leagues in 1999, Montgomery Gentry's five previous studio albums (and a greatest-hits collection) have all cracked the Country Top Ten. In addition, each album has been certified gold or platinum. Of the 20-plus singles they've released to date, 13 have landed in the Top Ten -- including the title track from 2008's Back When I Knew It All. It's a hell of a track record. Montgomery Gentry don't write much of their material, but they don't need to. They have a crack band and a formula that works. They combine good-time outlaw country, hard '70s-style Southern rock (although completely dressed and compressed for the 21st century), and a sense of friendly, next-door-neighbor jocularity on record and a sense of rave-up stadium rock theatricality on tour, making for dedicated -- perhaps even fanatical -- fans. Back When I Knew It All has a terrific lead single that's part nostalgic reverie, part morality tale dressed in a breezy melody and solid 4/4 beat. Another guaranteed fan-pleaser is "One in Every Crowd." It's an anthemic heartland rocker with a crowd-chanting chorus. Written by Eddie Montgomery, Ira Dean, and Kim Tribble, this is redneck John Mellencamp taken to an extreme. It's a song recorded to accompany a video if there ever was one. It's followed by "Look Some More," another big guitar (this time slide), big cinematic piano rocker that is reminiscent of .38 Special. It's another morality tale, where the protagonist speaks to his restlessness and aimless wandering through life without really getting anywhere -- as if confession were enough. The entire album centers on big rocking tunes this time out. There are message songs, but they are disguised as party ravers. There are the obligatory -- for this duo in particular but for contemporary country in general -- spiritually minded tunes like "Roll with Me," the truly bizarre nearly heavy metal opener "The Big Revival," and the beautiful closer "God Knows Who I Am." All of this said, Back When I Knew It All falls prey to what seems to be haunting Nashville in 2008: an album composed of nothing but singles without a unifying thread. The themes are all similar and the tracks are familiar and recognizable, and could be interchanged with songs from any of the duo's other albums, but they don't fit as one. Released in 2006, Some People Change cracked the Top Ten, but it was a bit disappointing saleswise -- despite the fact that it was the most realized, fully fleshed-out set by the group to date. Maybe that's why this recording feels more like a look back to the early days of Tattoos & Scars or Carrying On than it does a logical next step toward growth. The hardcore fans will love it, but this isn't the album that will win over many new ones. 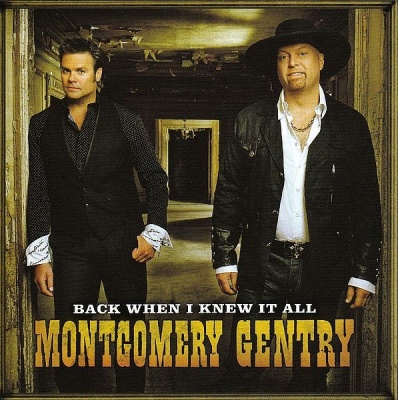 Back When I Knew It All Album Information