"Break My Soul" offered much to dissect as the preliminary single off Renaissance, Beyoncé's first solo studio album since Lemonade and part one of a promised three-act project. Integrating a flashback to early-'90s crossover house hit "Show Me Love," the resilience anthem -- reinforced with an echoing gospel choir and sampled Big Freedia exhortations -- came across like a nostalgic dance remix preceding the original version. Instead, it slid neatly into place on the parent LP not only as an accurate representation but also as a foreshock to an hour-long housequake filled with irrepressible exuberance in celebration of self and sisterhood. Among those to whom Beyoncé dedicates Renaissance is her late gay cousin and godmother, Uncle Jonny, credited for introducing her "to a lot of the music and culture that serve as inspiration for this album." The multitude of dancefloor sounds cultivated and celebrated since the late '60s in underground clubs by liberation-seeking gay, Black, and Latino dancers has been a natural ingredient in Beyoncé's recordings since the birth of Destiny's Child (take the use of the Love Unlimited Orchestra's proto-disco exemplar "Strange Games & Things" in "No, No, No, Pt. 2"), but it is the basis of Renaissance. The LP is top-to-bottom danceable and sequenced with each track setting up the next, through the ecstatic finale, where Beyoncé most potently mixes sensuality and aggression, claiming her man with nods to Donna Summer, Giorgio Moroder, Patrick Cowley, and Larry Heard. "Cuff It" is a disco-funk burner with Nile Rodgers' inimitable rhythm guitar and a slick quote from Teena Marie's biggest ballad, though it has all the vigor of Lady T's uptempo classics. The more relaxed "Virgo's Groove" is designed for circling the rink with its delectably plump bassline and handclaps, and moves to a private room where Beyoncé commands, in one of the set's many memorable turns of phrase, "Motorboat, baby, spin around." Renaissance pulls from the more recent and present sonic developments with equal guile. Dancehall-derived dembow is stretched out for the strutting opener "I'm That Girl." "Heated" works a chugging Afrobeats rhythm, and is keenly trailed by the swollen dubstep pulsations of "Thique." The most exciting moments fearlessly blend and switch eras. "Pure/Honey" alternates between a duly vulgar ballroom brush-off and pop-funk rapture, and "Church Girl," a rousing gospel-bounce marvel, weaves the Clark Sisters with the decidedly less-reverent DJ Jimi and the Showboys. Beyoncé is vocally up to the challenge of juggling the almost-innumerable quantity of styles and references, sighing, purring, beaming, belting, and spitting fire with all the required conviction and attitude. Her congregation of fellow writers, producers, and vocalists is a formidable assembly of close collaborators (the-Dream, Tricky Stewart, Mike Dean, NOVA Wav), younger trailblazers (Honey Dijon, Kelman Duran, Tems), and legends (Grace Jones, Raphael Saadiq). Act II will presumably have at least one ballad. They're not missed here. 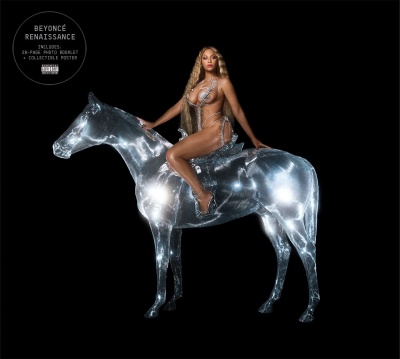