Professor Satchafunkilus and the Musterion of Rock Review

While a lot of guitar heroes sling their axes for the sole purpose of proving that they are the fastest shredder in the showroom, picking their Mixolydian scales to the nth degree, on the ridiculously named Professor Satchafunkilus and the Musterion of Rock Satriani shines in his ability to hold back and write tasteful verse/chorus songs with memorable hooks. Like the majority of his songs in his ever growing catalog, most of these are technically impressive numbers that never go overboard with the showboating and rely on a sense of feeling rather than virtuoso technique. When you're considered a guitar god, restraint is a virtue. Of course he can zip along on the fretboard with the best of the best, but the trait that has always separated Satriani from the other guitarists gracing the cover of Guitar World for more than 20 years is his ability to blend technique with guitar lines that are melodic enough for a vocalist to sing. Thankfully, he never takes the microphone on this recording, but on the first half of the gentle and bluesy "Come on Baby," it's easy to imagine substituting his custom Ibanez with a human voice that coos the words "Come on baby, come on babe" on the choruses. Similarly, the "Diddle-Y-A-Doo-Dat" sounds like the title might suggest, starting out with some Yes-style prog licks and flipping into a John Scofield-flavored jazz-funk jam with bends and pull-offs that are best described as "diddleys" and "doo-dats." Neither cut quite astounds, but both demonstrate his versatility on the instrument and his ability to adapt to the climates of various genres. Likewise, the flamenco-flavored "Andalusia" starts off as a warm "Spanish Fly" acoustic number, exploding into a furious distorted solo backed by longtime drummer Jeff Campitelli and former David Lee Roth bassist Matt Bissonette. Along with his backing band, Satch's son ZZ Satriani gets a taste of his pop's spotlight, just like Wolfgang and Dweezil, and provides a few sax flutters on the semi-funky "Professor Satchafunklius." With the exception of these tracks, the remainder of the album is purely rockin', and doesn't vary much from his prior 12 releases. The anthemic "Overdriver" could be an outtake from Flying in a Blue Dream and will surely find a place in his G3 set list, "Musterion" sounds like a Not of this Earth moment, and the two-handed handiwork and blistering riffage on "Asik Vaysel" will definitely have air guitarists salivating. With the good comes the bad, and at the album's most embarrassing moment, "I Just Wanna Rock" advertises cornball clichés with a proudly clanked cowbell, a talkbox Frampton-izing, and a boisterous crowd chant-along. This is a new low for Joe -- practically an open letter admitting that he's OK with the idea of becoming passé. At a time when his former pupil Steve Vai is experimenting with radical orchestral arrangements, it would be nice to see the professor branch even further away from his trademark style, ditch the '80s production, and try something more unconventional, but for the most part he's doing what he does best here, and fans will be content with that. 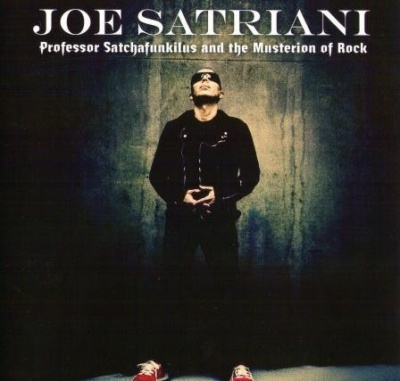 Professor Satchafunkilus and the Musterion of Rock Album Information