Booked into San Francisco's Fillmore Auditorium and slated to film three songs for the venue's Live! at the Fillmore TV show, Joe Satriani decided to take the opportunity to record and film his show for a double CD and DVD. The audio version, clocking in at close to two-and-a-half hours, serves to create a thorough introduction to an artist who, up to this point, had not released a real compilation. The album presents concert recordings of material first heard on Satriani's previous studio releases: one from Not of This Earth (1986), four from Surfing With the Alien (1987), one from Dreaming #11 (1988), four from Flying in a Blue Dream (1989), two from The Extremist (1992), two from Time Machine (1993), one from Joe Satriani (1995), six from Crystal Planet (1998), and three from Engines of Creation (2000). The guitarist varies the pace, combining up-tempo hard rock tracks with more melodic medium-tempo numbers and even some lovely ballads. His vibrato-heavy, sustain-drenched playing remains consistent and identifiable no matter what the context, but despite his reputation as a high-speed riff technician his work can be surprisingly lyrical at times. His band -- bass, drums, and a keyboard player who sometimes picks up a rhythm guitar -- provides letter-perfect support, and Satriani draws considerable energy from an enraptured audience, making this an ideal sampler of the guitarist's work. Anyone who thinks of hard rock guitar playing as only one part of a complete musical palette, or who looks for more of a dynamic range in an instrumentalist, is likely to suffer from flagging attention before the two discs are over. But lovers of rock guitar in the Jimi Hendrix tradition will love this one as much as the fans in attendance did. 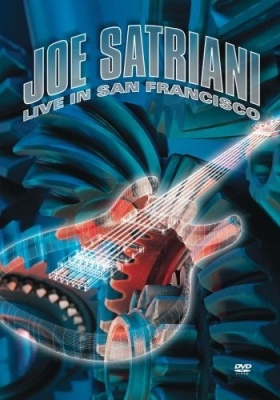