Throughout its nearly decade-long run, the G3 series of tours has always featured guitar wizards Satriani and Vai at the helm, with a mystery third guest always in the rotation to contrast against the mentor-and-student duo. Sometimes the results are complementary (Eric Johnson), and other times they're mildy theatrical and amusing (Yngwie Malmsteen). This time around the special guest star, Dream Theater's John Petrucci, finds himself in the middle of Tokyo and starting off the two-disc session. His "Glasgow Kiss" and "Damage Control" are both presented with great skill and technical precision, sometimes hitting too close to the mark, making his accuracy and his performance seem cold and calculated. Still, he's exponentially more accessible than the flamboyant Yngwie and he sticks to the basics of delivering a solid performance. Vai also delivers a solid performance with a rousing rendition of his most well-known solo outing "The Audience Is Listening." Unfortunately, the hysterical teacher's voice is missing and somewhat detracts from the song's charm, but it's a minor complaint few would gripe about. "K'M-Pee-Du-Wee" is extended and has never sounded better, especially as Vai stretches out and delivers more of an improvisational element to the more atmospheric parts of the song. And finally, Satriani takes the stage and presents three extremely eclectic selections from his catalog, culminating in the intensity of his anthem "War" off of his 1992 epic The Extremist. The session ends with a three-song cover jam led mainly by Satriani that features ZZ Top's "La Grange," Jimi Hendrix's "Foxey Lady" and Deep Purple's "Smoke on the Water." It's not the best G3 lineup ever, but it's far from the worst and guitar fanatics the world over will no doubt thoroughly enjoy it. 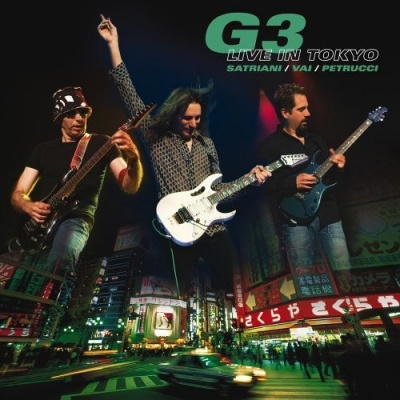