In an essay on "The Guitar's Use in Pop Music," Frank Zappa once made reference to latter-day guitarists and their penchant for "clouds of educated gnat-notes." (He also referred to their "pathetic lick-spewage and freeze-dried stereotypifications.") The point he was hammering home like so many nails at a crucifixion was that pop/rock guitar playing/soloing had lost its character and no longer reflected the personality of the individual player. Form and feel had been sacrificed for blazing speed and spiritless riffage. One must assume that G3 Live: Rockin' in the Free World -- from star guitarists Joe Satriani, Steve Vai, and Yngwie Malmsteen -- is, by and large, the kind of axemanship that Zappa was decrying: machine-like technicians lacking a sense of musical lyricism. While that appraisal does lend some valuable insight into this album, it would also be too harsh to apply it rigorously here. To begin with, this primarily instrumental two-disc set -- recorded at the Uptown Theatre in Kansas City on October 21, 2003 -- is entertaining. And there's no doubt that this trio of guitar slingers really can play -- it's just that they do so, particularly in terms of their soloing, within rather narrow stylistic parameters (for the most part).

Each guitarist performs his own set on the lengthy first disc, before they team up to perform three covers -- Jimi Hendrix's "Voodoo Child (Slight Return)" and "Little Wing," and Neil Young's "Rockin' in the Free World." Admittedly, the vehicles for the trio's virtuoso indulgences on this album range from hard rock to metal to classical, but are really just hooks to hang solos on. Sometimes the other instruments cut out altogether. Satriani's titanic boogie rocker "The Extremist" opens proceedings and sets the bar pretty high. He shows a lighter touch on "Always With Me, Always With You," and dips into his classical bag for "Midnight," before tearing things up again with the metal raver "The Mystical Potato Head Groove Thing." Vai offers up the loftier, organ-laced "You're Here," the lurching hard rock of "Reaping," and the slow and stately "Whispering a Prayer," which brings to mind the playing of Yes' Steve Howe and some of the work on Jeff Beck's solo albums. A nice stylistic departure. Meanwhile, Malmsteen, renowned for his preternatural speed, shows just how fast those gnat-notes can be fired out on tracks like the perfectly titled "Blitzkrieg" and the classical "Trilogy Suite Op. 5: The First Movement." The Hendrix jams are disappointing and suicidal song choices to begin with, utterly damning the players on the matter of style through unavoidable comparison to the originals. But "Rockin' in the Free World," which doesn't dilute the song itself, is a highlight and gives the set a certain passion that is lacking in other places. This is a showcase album from three guitarists with plenty of flash and flair, excellent technique, and just enough stylistic variety to keep the balloon in the air. Of course, regardless of what Frank Zappa might've had to say, speed-guitar freaks are gonna love this one. 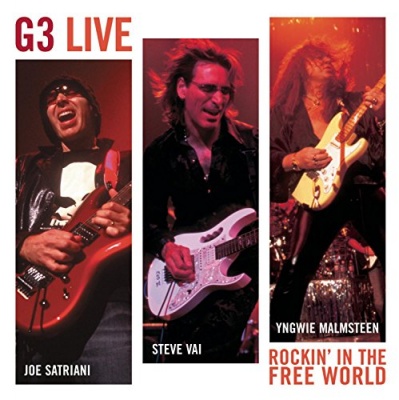