One of the defining pop stars of the decade, P!nk is perhaps more successful than ever, having just scored her first U.K. number one album, Funhouse, and a huge-selling number one single, "So What." So P!nk Box, a unique package consisting of her first four studio albums, is the perfect opportunity for any recent converts to find out how she's managed to sustain such an impressively consistent career. Debut album Can't Take Me Home is undoubtedly a product of its time, with its staccato beats and harpsichord riffs heavily influenced by the late-'90s chart domination of Destiny's Child and TLC. Even amidst its identikit R&B production, P!nk's rebellious nature shines through, particularly on the first two singles, the feisty "There You Go" and the operatic "Most Girls," but there is very little to suggest she would avoid the flash-in-the-pan fate of the countless other similar artists around at the time. However, her seamless reinvention on follow-up M!ssundaztood changed all that. Evidently taking much more control of her career, P!nk personally tracked down ex-4 Non Blondes frontwoman Linda Perry to work on a collection of angst-ridden guitar pop songs that would go on to sell over 12 million copies worldwide. The likes of "Misery," a duet with Aerosmith's Steven Tyler, the confessional "Family Portrait," and the controversial number one "Just Like a Pill" all combine honest lyrics with a slightly alternative sound, which would later provide the benchmark for the careers of Kelly Clarkson and Katy Perry, to name just two. Third album Try This, co-written with punk band Rancid's Tim Armstrong, saw P!nk move even further away from her urban beginnings. The hillbilly rock of "Trouble" and frenetic drum'n'bass-tinged "Last to Know" show an artist unafraid to experiment, but without the pop sensibilities of its predecessor, Try This failed to match even half its sales. Taking two years out to record the curiously titled I'm Not Dead, P!nk returned with a sound that borrowed from all three previous records to convincing effect. The Paris Hilton-baiting first single, "Stupid Girls," harks back to the polished R&B of her debut; "Who Knew," arguably her finest moment, is an emotional guitar ballad reminiscent of her sophomore effort; while the bluesy, acoustic "The One That Got Away" could have been lifted from her less polished third. Any casual fan may find four complete albums a bit hard going and any future greatest-hits compilation may now be rendered rather pointless. But for anyone wishing to investigate further, P!nk Box is a comprehensive value-for-money collection from the artist most likely to be the successor to Madonna's pop crown. 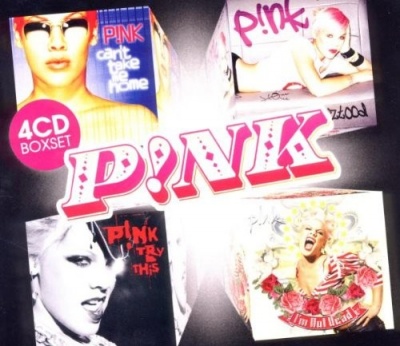