Richard Thompson compared his bumpy marriage to Linda Thompson to a roller coaster named "the Wall of Death" and Pink picks up this carnivalesque thread, calling her troubled relationship with motocross star Carey Hart a Funhouse on her own entry into a long prestigious line of autobiographical divorce albums that stretches back to Blood on the Tracks. Naturally, Funhouse doesn't have any musical similarities with either Blood or Shoot Out the Lights, but Pink's divorce album is also emotionally different than either of these classics or Marvin Gaye's Here, My Dear. Dylan, Thompson, and Gaye layer their albums with self-recriminations and ruminations, niceties that Pink shrugs off in one song, the brooding "I Don't Believe You." Other songs allude to the pain of the separation but never in a way that digs deep -- the musically fine blues-rocker "Mean" trots out clichés, the delicate spooky Stevie Nicks folk of "Crystal Ball" skirts the divorce, and far from being a primal scream, "Please Don't Leave Me" surges on a Max Martin hook that pushes away the pain. But as Pink makes clear with the album-opening single "So What" -- also co-written with Martin -- she's more than ready to get out of this relationship, thrilled that she's still a rock star, still drinking in the afternoon. That her enthusiastic hedonism kind of contradicts the letter of her Britney-baiting "Stupid Girls" doesn't mean that it violates the spirit, as this is still the same Pink, the one who spits out jokes as she rumbles. This snotty stance is second nature to her, so maybe that's why Funhouse only really clicks when Pink abandons any pretense of mourning her relationship and just cuts loose with galumphing rhythms and schoolyard taunts, the kind that fuel both "So What" and "Bad Influence" and make them instantly indelible. This kind of oversized, obnoxious pop is where Pink's heart is at -- she's ready to party and as long as the tempo is high, Funhouse is a ride, empowered by her post-divorce freedom. In a way, that does make Funhouse unique among divorce albums, as it's the first to concentrate on liberation rather than loss -- but if she was going to go in this direction, Pink may have been better off not pretending that she's bothered by the breakup. 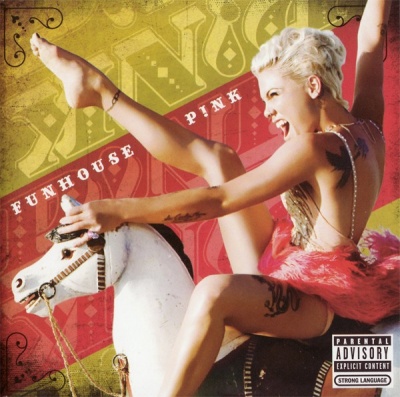