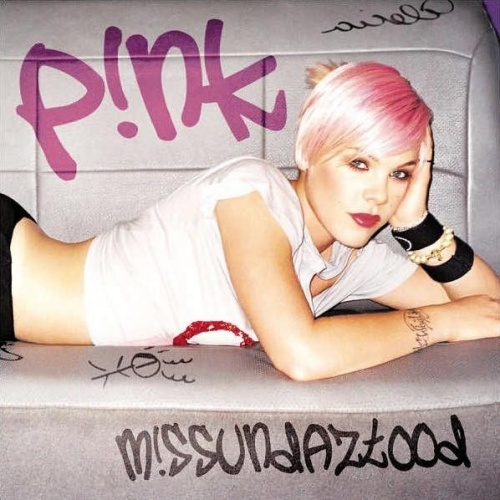 Pink's debut album was a promising collection of dance-pop, easily lumped into the teen pop boon of 2000 since she was young and sang over savvy, skittering club beats. Those comparisons irked -- hell, angered -- Pink, and she was determined to prove she was real with her second album. So she called up her idol, Linda Perry of 4 Non Blondes fame, to help her rock and write; bared her soul; fought for some artistic control; brought in Steven Tyler; and wound up with M!ssundaztood, a title bound to never show up on Internet search engines. This all sounds like the script for a VH1 movie, but the wild thing is that M!ssundaztood not only works, it works smashingly -- a bewildering amalgam of sounds and attitudes that shouldn't fit together, but defy all odds and do. This record bubbles over with imagination, as hooky pop songs like the title track rub shoulders with glitzy dancefloor anthems like "Get the Party Started" and sexy, swaggering arena rock redux like "18 Wheeler" before delving into weird confessionals like "Family Portrait," "Dear Diary," and "My Vietnam." Forget that this isn't what anybody would have expected Pink to do; it's hard to imagine anybody else that would have the idea and the inclination to blend late-'80s, metal-spiked album rock with modern hip-hop and dance, then dress it up with dazzling modern pop production, all the while not avoiding painful subjects (particularly her dysfunctional family) or melody. If that's not an artistic statement, then what is? And the damn thing is, there hasn't been a record in the mainstream this vibrant or this alive in a long, long time.