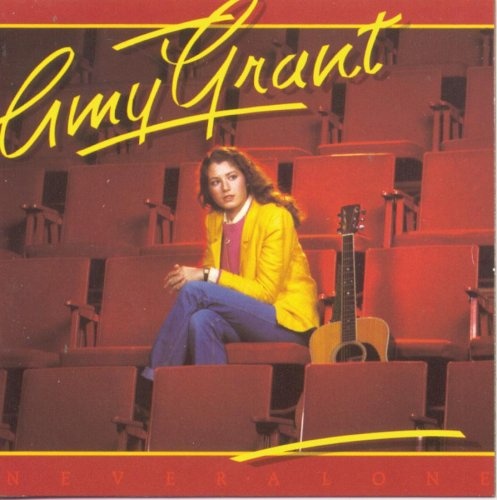 When you stop to think about it, it's difficult to pinpoint what it was that propelled Amy Grant to her unquestioned position as the reigning queen of Christian contemporary music. It wasn't her songwriting ability; Grant has rarely written, save for collaborations with greater talents like Michael W. Smith, Wayne Kirkpatrick, Keith Thomas, or (ex-)husband Gary Chapman. Nor did she achieve fame through any particular accomplishment as a musician, as was the case with her CCM contemporaries Smith, Phil Keaggy and Keith Green. The record jacket for Never Alone pictures her sitting next to an acoustic guitar, but all of the guitars on the record (as on all of her records) are handled by session artists. She is known primarily as a vocalist, but unlike Sandi Patti or Charlie Peacock, she is not a particularly powerful or distinctive singer. Her voice is pleasant, pretty, and appealing, but limited in range and, especially on early records like Never Alone, sometimes thin and breathy. It's tempting to speculate that her friendly Everywoman persona struck a chord with fans (as it undoubtedly did) or that she looked exceptionally attractive in leopard skin jackets and pink lamé pants (which probably helped). But it's probably more accurate to say that Grant just got lucky in being the beneficiary of extremely skillful marketing campaigns by Word and A&M Records, who helped her develop a career-spanning ability to roll with the times and reinvent herself stylistically. This ability can be demonstrated by comparing the light pop of Never Alone songs like "Walking Away With You," "That's the Day" and "It's a Miracle" with later keyboard-pop hits such as "Love Will Find a Way" and "Baby Baby." Like the singer herself, Never Alone is pleasantly overachieving, easy to like but not particularly deserving of deep respect.