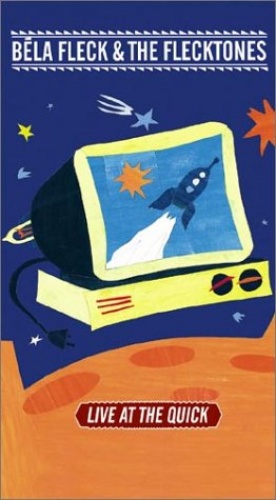 Bela Fleck and the Flecktones bring sophistication to the hard-to-define genre of jam-band music. While Phish and Dave Matthews Band helped to modernize the jam-band approach, Bela Fleck almost single-handedly took it to the next level by employing a drummer who plays on a home-made, electronic "drumitar" and by using his own instrument--the banjo--more like a jazz guitar. Fleck certainly knows how to break down musical borders and sandblast musical stereotypes.

On LIVE AT THE QUICK, Fleck takes his penchant for all things weird one step further by employing an improvising oboist and bassoonist, a steel drummer, a Tuvan throat singer, and a tabla player. What makes Fleck so interesting, unique, and downright brilliant, is his ability to take a motley bunch such as this and create cohesive, listener-friendly music. Particularly strong tracks include the hypnotic "Big Country," which features a riveting electric solo by Fleck, and the Middle-Eastern influenced "A Moment So Close." On the latter, we are treated to the bass virtuosity of Victor Wooten, together with Sandip Burman's tabla playing and Congar Ol'Ondar's fascinating throat singing.