Thanks to a few productions by hitmakers Lil Jon and Jazze Pha, there are indeed some Goodies to be found on Ciara's debut album, even if the young dance-pop singer does little to distinguish herself from the legion of fellow young dance-pop singers filling the urban American airwaves. The title track is far and away the highlight here, one of seemingly countless Lil Jon songs to become hits in summer 2004 (others including Usher's "Yeah!," Trillville's "Neva Eva," Lil Scrappy's "No Problem," Pitbull's "Culo," and Petey Pablo's "Freek-a-Leek"). "Goodies" is fairly similar to these songs, except that it's sung by a young girl. In fact, the song is an apparent response to "Freek-a-Leek," employing a near-identical beat and the services of that song's rapper, Petey Pablo. The difference is that while "Freek-a-Leek" took the hardcore rap perspective of courtship, boasting of Petey's sexual exploits and how he can provide all a woman could possibly want physically, Ciara takes the contemporary R&B perspective, boasting contrarily that she has what all the guys want but won't be exploited: "I bet you want the goodies/Bet you thought about it/Got you all hot and bothered/Mad 'cause I talk around it/If you're looking for the goodies/Keep on looking 'cause they stay in the jar." It's a simple song, yes, but it's quite a rousing album opener. From there, the next four songs -- "1, 2 Step," "Thug Style," "Hotline," "Oh" -- are good, if not great, as executive producer Jazze Pha serves up some first-rate beats and catchy hooks here and there. But just as Beyoncé's Dangerously in Love descended into boilerplate balladry during its second half, Goodies unfortunately follows suit, bringing the initial festivities to a cloying conclusion. In the end, the beats of Lil Jon and Jazze Pha are the true Goodies here. Ciara is likeable enough, especially on the dance songs, where she resembles a young Janet Jackson, not so much actually singing as projecting a personality onto the productions. However, when she turns to run-of-the-mill ballads on the album's second half, she seems just as faceless as the songs themselves, lacking panache and, at times, personality. 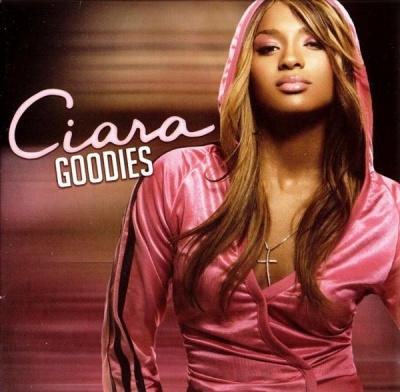