Duke Ellington was constantly composing new material as well as creating new arrangements of vintage works, as heard on this Columbia LP recorded in 1959. "Perdido" is an extended feature for Clark Terry's virtuoso flügelhorn, though this would be his final studio session as a regular member of the Ellington band. "Copout Extension," a longer version of an earlier work called "Copout," showcases marathon soloist Paul Gonsalves on tenor sax. Among the new pieces, the three-part suite "Duael Fuel" features drummers Jimmy Johnson and Sam Woodyard, though the piece was dropped from the band book after 1960. "Idiom '59" is another new three-part suite, with the elegant clarinet of Russell Procope, clarinetist Jimmy Hamilton's more raucous styling, and finally, the leader paired with Terry (again on flügelhorn). This suite had an even shorter life; it had been premiered at the Newport Jazz Festival earlier in the year, and this was its second and final performance. Ellington's brisk swinging chart of "Things Ain't What They Used to Be" spotlights the matchless alto saxophonist Johnny Hodges, who was always as ready to play the blues as he was ballads. "Launching Pad," though credited to Ellington, was actually written by Terry and orchestrated by the pianist. This sassy blues strangely features Ray Nance instead of its composer as the trumpet soloist, along with a quartet consisting of Terry, Britt Woodman, Hamilton, and Gonsalves. Highly recommended. 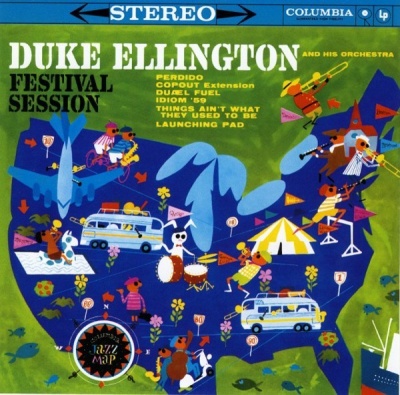