Duke Ellington's Third Sacred Concert was one of his last recordings -- and it was made under rather exalted conditions. It was U.N. Day, and the location was London's Westminster Abbey, with Prime Minister Heath and Princess Margaret in attendance and U.N. chairman Sir Colin Crowe delivering a solemn British introduction. Alas, the royal trappings can't conceal the flaws in this, the weakest of the sacred concerts. It lacks the show biz kick and exuberance of the first concert and the even more eclectic impulses of the second, now burdened with a subdued solemnity and the sense that the ailing Ellington knew his time was drawing to a close (he would be dead exactly six months later). The low point comes early on with the mawkish "Is God a Three-Letter Word for Love?" -- uncomfortably sentimental stuff for Ellington -- and even Duke's own piano work stumbles a bit. The mildly swinging "The Brotherhood" is really a plug for the sponsoring United Nations, where tenor saxophonist Harold Ashby does his best to stand in for the irreplaceable Paul Gonsalves (Gonsalves would have been there but he went on a binge that landed him in a London hospital on the day of the concert). Things pick up somewhat with a nifty "Hallelujah" and the swinging preamble to the otherwise dreary extended concert piece "Every Man Prays in His Own Language." "Ain't Nobody Nowhere Nothin' Without God" has some of the old Ellington sass and verve and "The Majesty of God" has its passages of serenely assured swing. The Swedish soprano Alice Babs returns from the second sacred concert -- practically sight-reading her numbers, we're told. By concert time, Harry Carney was the last of the great Ellington soloists left in the band; he has a fine passage in "The Lord's Prayer: My Love." Ironically, the John Aldiss Choir is the best of the choruses in all three sacred concerts. An overlooked stepchild in the Ellington canon. 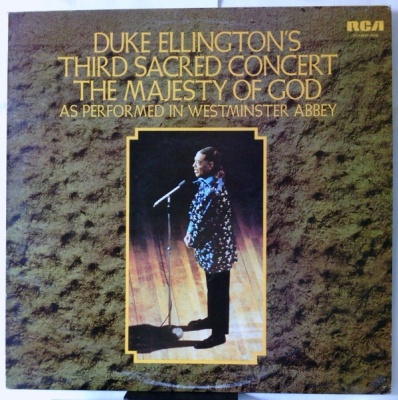