Bring Ya to the Brink Review

It's hard to see any real pattern in Cyndi Lauper's recording career, as she bounces from style to style, sometimes with her eye on the charts but more often following her own muse. Released in the summer of 2008, Bring Ya to the Brink is her first album of original material to be released in the U.S. since 1997's Sisters of Avalon, and she hasn't exactly been quiet since then, doing collections of cabaret covers; releasing Shine, a pop album that wound up surfacing only in Japan; and reworking her own songs on The Body Acoustic, a 2005 album far more adventurous than its description suggests. Although it doesn't sound much like The Body Acoustic, Bring Ya to the Brink continues with that sense of adventure, as Lauper indulges in her first full-on dance album ever here. Unlike her contemporary Madonna, who has also been pursuing hardcore dance albums with Confessions on a Dance Floor and Hard Candy, Cyndi Lauper couldn't be bothered with sounding hip or contemporary -- which isn't quite the same thing as saying that she sounds preserved in amber on Bring, as this isn't a self-conscious '80s revival album even if it is filled with retro synths and drum machines. Rather, it's a reflection of how Lauper is so removed from the whims of fashion that she can create her own world, borrowing from early-'80s new wave and sleek early-'90s club music, writing lyrics that may be better suited to a confessional but work well here, as this is such an idiosyncratic little record, existing in its own little time warp. Perhaps this could have used a greater quotient of pop hooks in order to pull in listeners who aren't hardcore Lauper fans, but that's not where Cyndi Lauper is at: she's doggedly following her own path, and if you look back on what she's done in the nearly 25 years since She's So Unusual, it's quite an interesting journey. Bring Ya to the Brink is one of the more intriguing detours along the way. 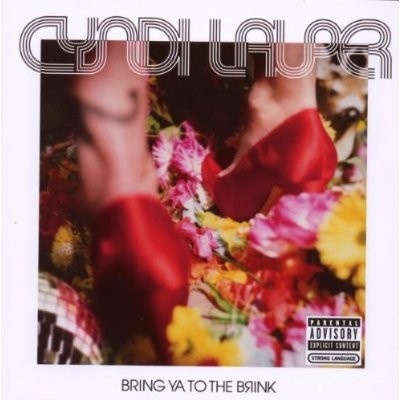 Bring Ya to the Brink Album Information