As the girl who just wants to have fun, Cyndi Lauper became an '80s music icon with her flamboyant style, powerful baby-doll voice, and quirky songs, but as time and tastes moved on, her playful persona wore thin and attempts at becoming a more serious artist failed to regain her dwindling audience. With At Last, Lauper steps even further away from that playful image to become the girl who just wants to sing as she tackles a set of pop standards that showcase her underrated voice. Although occasionally shrill and reckless, Lauper's forceful tones can be quite moving and awe-inspiring when corralled into the proper setting, as with her bluesy take on Etta James' "At Last." With its lazy tempo and minimal arrangement, Lauper is able to relax and convey the lyrics in one of her most mature and affecting performances. Even more low-key is the whisper quiet of "Walk on By," in which she turns Dionne Warwick's midtempo gem into a dark tale of mourning by sadly singing the lyrics over a crawling tempo. Getting a Tori Amos-style ballad treatment is the Animals' "Don't Let Me Be Misunderstood," which lets Lauper's rock roots rise to the surface with her edgy performance. While some of her song choices work, others fall flat, like "La Vie en Rose," in which her slightly ragged reading is too rough for the delicate song. Also misfiring is her corny duet with Tony Bennett, "Makin' Whoopee," where the voices of these two New Yorkers clash like stripes and plaids. Lauper also has a little too much fun with Maurice Williams & the Zodiacs' "Stay," as she reverts back to her boisterous voice of yesteryear and disrupts the mature tone of the disc. Although the results are mixed, At Last does focus on Cyndi Lauper's best asset -- her voice -- and may help to rejuvenate a career in which the personality unfortunately overshadowed the talent. 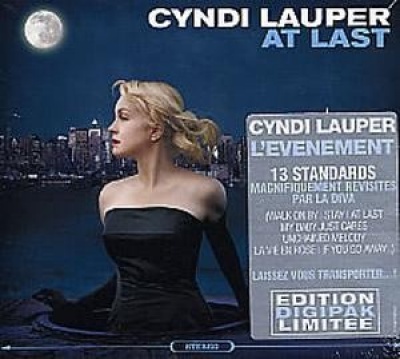