Cyndi Lauper looks back at her hits on The Body Acoustic, with a number of guests including Adam Lazzara, Shaggy, Sarah McLachlan, Vivian Green, Ani DiFranco, and Jeff Beck. Conceptually, this looks like a disaster. Alanis Morissette did it as well and the results were mixed at best. But Lauper has always possessed a talent that goes beyond the material she has sung -- and she can sing anything. The album is produced by Lauper with Rick Chertoff and William Wittman -- who recorded and mixed the disc. Lauper's band is a wide and varied assortment that includes contemporary jazz bassist Mark Egan. "Money Changes Everything," with Lazzara, is a down-home calypso and country ramble. "All Through the Night," with Shaggy, begins as an Appalachian folk tune until Shaggy begins toasting and Lauper shifts it into ballad gear. It's a conflicting set of styles that's held together in the genuine ache of her voice. "Time After Time" would be a beautiful song in anybody's hands. Here, with McLachlan, she goes down into the tune's lyrics and abandons the drama of the original for the intimacy of its words. The human heart becomes the interlocutor of memory and loss. Lauper and McLachlan trade verses as 12-strings, muted drums, and space define the place where lost love becomes the center of the question of devotion across time and space. "She Bop" is almost a blues song, and as a result it reveals deep eroticism as the pleasures and sweet release of masturbation fall from the singer's voice like raw honey. And so it goes with "Above the Clouds," as Beck's trademark biting tone is juxtaposed against piano and space. This is a ballad that actually hurts. Its drama is realized in Lauper's phrasing and Beck's playing bites harder accentuating it -- relaxed, slow, and deeply emotive. "Sisters of Avalon" features soul chanteuse Green and DiFranco. It's funky as hell. Deep roiling bass pops and drones with acoustic guitars, fiddles, and a dulcimer moving through and around it. The drums fall just behind the beat as the singer goes for the crack in the lyrical spine of the track. The chorus-like refrain punches up its drama. Green takes her verse before an instrumental slide guitar interlude, and her wailing voice makes it among the album's best. Lauper sings without friends on a number of cuts as well, such as the beautiful "Colors" and the stunning "Fearless." This may be a slanted look at a greatest-hits package, but it comes off as an entirely new album full of adventure, grit, polish, and soul. 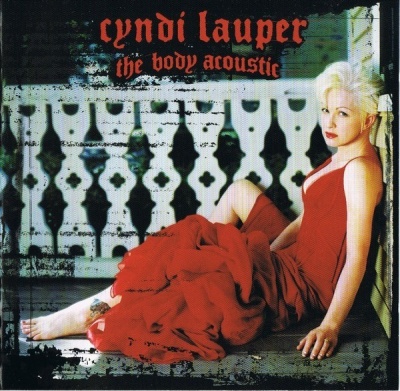