There are always two caveats with any recording by Canadian pianist Glenn Gould. First, Gould was always humming and moaning along with his own performances. Second, he fooled around with tempo, articulation, rhythm, form, structure, and expressive markings. This means potential listeners must always be advised that any expectations they bring to the music will almost always be utterly confounded by Gould's performance. So it is here in his 1974 recording of Beethoven's Bagatelles Opp. 33 and 126. Taped in Gould's own Toronto studio, Andrew Kazdin's stereo sound here puts the listener virtually on the bench with the pianist, and one can hear most if not all of his irrepressible vocalizing. Performed at the peak of Gould's enthusiasm for recording, his playing here is wild and wooly. Sometimes Gould adds all sorts of extraneous embellishments: check out the rolled chords in the first statement of the E flat major Bagatelle that opens the Opus 33 set. Sometimes he totally changes the tempo: check out the central Andante amabile e con moto of the E flat major Bagatelle that closes the Opus 126, which Gould takes as an Adagio ordinario. Sometimes Gould plays it so straight that the effect is affectless -- check out the E flat major Bagatelle at the center of Opus 126 with its dry articulation and détaché tone. And always there is Gould's vocal obligato, quiet but ever present. One may be ultimately convinced by what Gould does with the music or ultimately convinced that he is simply weird. But no one can ignore what Gould does with his voice. In the end, as in the end of every review of Gould, what can one say but caveat emptor! 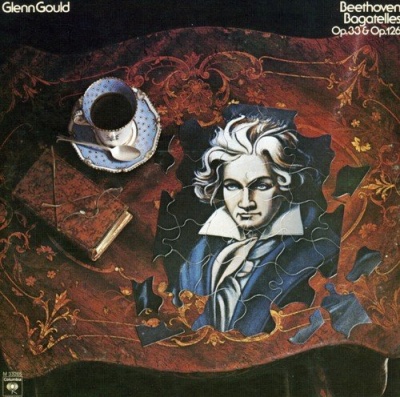