For many, the albums Glenn Gould recorded for Columbia between 1955 and 1981 are documents of unalloyed genius, particularly in his imaginative and masterful performances of Bach's keyboard works. For others, less enamored of Gould's recondite theorizing, studio editing, and distracting personal eccentricities (such as humming along out of tune while he played), these recordings are nonetheless fascinating documents of an original mind and still worth studying for their undeniable musicality. This Sony reissue in the revamped Great Performances series -- offered with original LP cover art, complete liner notes, and DSD remastering -- presents Gould at the peak of his creativity. Yet his 1964 recording of the Two- and Three-Part Inventions, BWV 772-801, was made less than a month before he made his abrupt departure from public performance, and that fact may affect how listeners receive these performances, as if signs of stress are detectable in his interpretations. Not so: Gould's accurate touch, transparent voicing, smooth legato, and controlled dynamics indicate quite the opposite. If there was any tension affecting Gould at this time, then it led to music-making at its finest, and Sony's superb remastering has brought all the subtleties of Gould's impeccable execution to the fore. Unfortunately, the improved sound quality has also made his humming even more pronounced than it was on vinyl, and it is unavoidable in the softer two-part inventions. This quirk may be bothersome to first-time listeners, even more than the slight traces of tape hiss or other background noises that are still evident. But with some careful volume adjustments, it is still possible to minimize this peculiar feature and appreciate Gould's brilliant performances in spite of it. 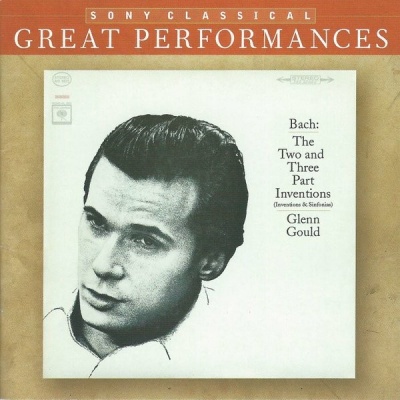