Until the '40s, Béla Bartók -- with his angular melodies, his brash colors, his harsh harmonies, and especially his aggressive rhythms -- was regarded as a modernist boogieman. But after his exile to America, Bartók's modernism mellowed, and his final works are among the most immediately attractive in twentieth century music. This is especially true of his 1944 Concerto for orchestra, with its appealing melodies, brilliant colors, vivid harmonies, and especially its irresistibly infectious rhythms. With the Concerto for orchestra, Bartók went from a modernist boogieman to a modernist master.

Until fairly recently, the best Bartók conductors were Hungarian. But while Szell, Solti, and especially Reiner are remembered as great Bartók conductors, Eugene Ormandy is often forgotten. This is unfortunate, since, as this 1963 recording of the Concerto for orchestra with the Philadelphia Orchestra demonstrates, Ormandy was a superlative Bartók conductor with melodies that sing, colors that sparkle, harmonies that shine, and rhythms that jump and leap and dance. The Philadelphia was at its virtuosic peak under Ormandy in the early '60s, and its performance here is technically impeccable, but, more importantly, it is extremely energetic and deeply dedicated. Last rereleased in 1992, this concerto is a welcome reminder of Ormandy's excellence as a Bartók conductor.

Bartók's 1938 Sonata for two pianos and percussion, with its Les Noces piano and percussion ensemble, is a piece of hardcore modernism, and even this ironically insouciant Gallic performance by pianists Robert and Gaby Casadesus with percussionists Jean-Claude Casadesus and Jean-Pierre Drouet from 1963 does little to diminish its aggression. Bartók's 1920 Improvisations on Hungarian Peasant Songs is another piece of hardcore modernism, but one with a warmly nostalgic heart that not even Charles Rosen's technically brilliant and belligerently modernist performance from 1963 can dim. Sony's remastering is crisp and vivid. 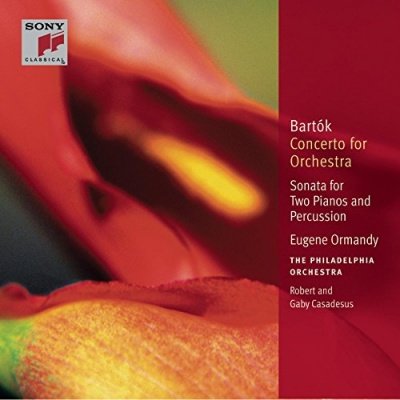